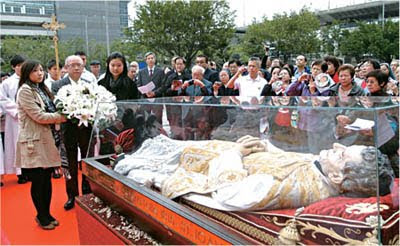 After having travelled around Hong Kong and Macao, Don Bosco’s casket arrived in Taiwan, which is also a part of the Salesian Province of China. The relics stayed on the island between 7 and 10 April, arousing faith and enthusiasm in a large number of people.

The Salesians in Taiwan had been preparing to welcome Don Bosco’s relics since October, but given the small percentage of Catholics on the island, about 01.4% of the population, until the last moment they had not known what sort of turn out there would be. In addition, for the local culture the pilgrimage of a relic was something difficult to understand, and the customs and other formalities at first seemed rather complicated.

In fact the visit of the casket became a great celebration involving not only the Salesian community and Family, but very many Christians and people of other faiths or none.

On 7 April, the day the casket arrived in Taiwan, the President, the Prime Minister and the Foreign Minister sent bouquets of flowers and greetings for the occasion. During the previous week many groups and parishes in different parts of the island had begun to call and announce that they were coming to venerate the relics. In this way during the four days stay of the casket, the Don Bosco parish church open 24 hours a day for the occasion was never empty. On average each day 1000 people visited the church and venerated the casket so much so that the 4000 momentos of the visit were insufficient; priests were kept busy hearing confessions and about 20 Masses were said all well-attended.

The most moving occasion during the visit was on 9 April with the celebration of the Spirituality Day of the Salesian Family. At the National University of Taipei, Fr Domingos Leong and Sr. Tommasina Lee FMA gave two talks and then answered questions. Then in another session Fr Francesco Tsang and the Salesian Cooperator Wong Li Mang spoke about their personal experience. The day continued with a social event and then Mass with the renewal of their promise by 35 Salesians-Cooperators, a youth festival and a prayer vigil led by the youngsters until the evening.

Many people recalled that on the same day 125 years ago, in 1886, Don Bosco, during his visit to Barcelona, had dreamed about the future expansion of his work into countries in the Far East.

The following day after a special farewell ceremony led by Fr Simon Lam, Provincial of China, the casket began its journey to the “Mary Help of Christians” Province of Myanmar.
Posted by Padre Steve at 5:01 PM