Could you survive without money? Meet the guy who does! 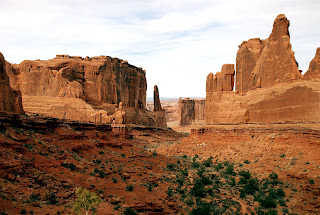 In Utah, a modern-day caveman has lived for the better part of a decade on zero dollars a day. People used to think he was crazy. This is very interesting! He may be crazy... or, does he have a point? The desert where he lives is filled with natural beauty and he seems to do ok for himself considering. Check it out. The story comes from the men.style.com site:
DANIEL SUELO LIVES IN A CAVE. UNLIKE THE average American—wallowing in credit-card debt, clinging to a mortgage, terrified of the next downsizing at the office—he isn't worried about the economic crisis. That's because he figured out that the best way to stay solvent is to never be solvent in the first place. Nine years ago, in the autumn of 2000, Suelo decided to stop using money. He just quit it, like a bad drug habit.

His dwelling, hidden high in a canyon lined with waterfalls, is an hour by foot from the desert town of Moab, Utah, where people who know him are of two minds: He's either a latter-day prophet or an irredeemable hobo. Suelo's blog, which he maintains free at the Moab Public Library, suggests that he's both. "When I lived with money, I was always lacking," he writes. "Money represents lack. Money represents things in the past (debt) and things in the future (credit), but money never represents what is present."

On a warm day in early spring, I clamber along a set of red-rock cliffs to the mouth of his cave, where I find a note signed with a smiley face: CHRIS, FEEL FREE TO USE ANYTHING, EAT ANYTHING (NOTHING HERE IS MINE). From the outside, the place looks like a hollowed teardrop, about the size of an Amtrak bathroom, with enough space for a few pots that hang from the ceiling, a stove under a stone eave, big buckets full of beans and rice, a bed of blankets in the dirt, and not much else. Suelo's been here for three years, and it smells like it. 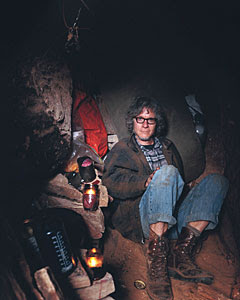 Night falls, the stars wink, and after an hour, Suelo tramps up the cliff, mimicking a raven's call—his salutation—a guttural, high-pitched caw. He's lanky and tan; yesterday he rebuilt the entrance to his cave, hauling huge rocks to make a staircase. His hands are black with dirt, and his hair, which is going gray, looks like a bird's nest, full of dust and twigs from scrambling in the underbrush on the canyon floor. Grinning, he presents the booty from one of his weekly rituals, scavenging on the streets of Moab: a wool hat and gloves, a winter jacket, and a white nylon belt, still wrapped in plastic, along with Carhartt pants and sandals, which he's wearing. He's also scrounged cans of tuna and turkey Spam and a honeycomb candle. All in all, a nice haul from the waste product of America. "You made it," he says. I hand him a bag of apples and a block of cheese I bought at the supermarket, but the gift suddenly seems meager.

Suelo lights the candle and stokes a fire in the stove, which is an old blackened tin, the kind that Christmas cookies might come in. It's hooked to a chain of soup cans segmented like a caterpillar and fitted to a hole in the rock. Soon smoke billows into the night and the cave is warm. I think of how John the Baptist survived on honey and locusts in the desert. Suelo, who keeps a copy of the Bible for bedtime reading, is satisfied with a few grasshoppers fried in his skillet.

For the rest of the story please click here!
Posted by Padre Steve at 8:52 PM

This is awesome! Just think, if he can live with zero dollars, we should be able to survive with much less than we spend.