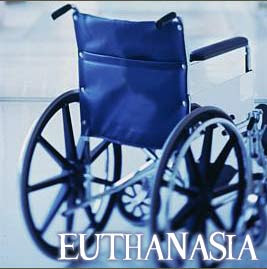 Sadly, things keep getting worse in regard to this "health bill" and the sanctity of life. The Democrat's health bill promotes euthenasia.

Two Republican leaders in the House of Representatives are confirming reports that the health care restructuring bill the House is currently considering promotes euthanasia. A leading patients rights advocate is worried about the effects of the legislation. Betsy McCaughey, the former New York lieutenant government who is now a patient's rights advocate, notes that the government-run health care plan would require "end of life" counseling for seniors. The counseling, she says, would be focused on telling seniors how to end their lives sooner. In a statement sent to LifeNews.com House Republican Leader John Boehner Republican Policy Committee Chairman Thaddeus McCotter confirm those fears. "Section 1233 of the House-drafted legislation encourages health care providers to provide their Medicare patients with counseling on ‘the use of artificially administered nutrition and hydration’ and other end of life treatments,'" the pair say.

Henry Waxman today announced that the health bill may skip committee if the so-called moderates do not accept the deal democrats worked out. Hat tip to the Gateway Pundit on this one!