"Remember them, not me!" 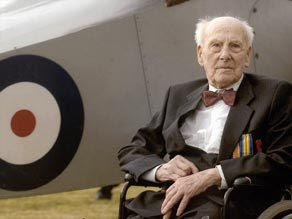 The passing of Henry Allignham marks the passing of a generation of heroes. CNN has the story of this WWI vet and hero:

Henry Allingham, the world's oldest man and the oldest surviving British veteran from World War I, has died at the age of 113, his care home said Saturday.

Henry Allingham was a founding member of the modern Royal Air Force. Allingham died in his sleep at St. Dunstan's care home in Ovingdean, England, the home said in a statement.
Born on June 6, 1896, Allingham was active until his final days, having celebrated his 113th birthday last month on the HMS President with his family, the care home said.
The Guinness Book of World Records Certified Allingham as the world's oldest man last month, St. Dunstan's said.
Britain's Queen Elizabeth and Prime Minister Gordon Brown both paid their respects to Allingham on Saturday.
"The queen was saddened to hear of the death of Henry Allingham. He was one of the unique generation who sacrificed so much for us all. Our thoughts are with his family at this time," Buckingham Palace said in a statement.
"I had the privilege of meeting Henry many times," said Brown. "He was a tremendous character, one of the last representatives of a generation of tremendous characters. My thoughts are with his family as they mourn his passing but celebrate his life."
Born in the East End of London during the reign of Queen Victoria, Allingham was brought up by his mother and grandparents. His father died when he was a baby. He joined the Royal Naval Air Service as an aircraft mechanic in 1915 after his mother died. Allingham was the last known survivor of the Battle of Jutland, considered the greatest battle of World War I. He was serving aboard the armed trawler HMT Kingfisher, which was sent to meet up with the British fleet as it fought the Germans off what is now mainland Denmark.
The battle still holds the record for the most gun-armed battleships and battlecruisers engaged in a fight, according to Britain's Ministry of Defence.
In 1917 Allingham was sent to France to support the Royal Flying Corps. His job as a mechanic was to service the aircraft and recover parts from downed planes, but pilots would often ask their mechanics to fly with them, so Allingham would sit behind the pilot and drop bombs or operate the machine gun.
Allingham served in Flanders until that November, when he moved to the aircraft depot at Dunkirk, France. He stayed there until the end of the war.
Allingham was a founding member of today's Royal Air Force, which was formed in 1918 when the Royal Naval Air Service merged with the Royal Flying Corps. He married his wife, Dorothy, in late 1918 and left the RAF a few months later, in April 1919. But Allingham remained a reservist, and during World War II he was called on to find a solution to the German magnetic mines that were bottling up the English harbor of Harwich, on the Essex coast.
Allingham and his team devised an effective system to neutralize the mines, after which every ship was fitted with a neutralizing device using the system.
His dedication to the military and the memory of fallen troops never wavered. In his later years especially, Allingham was often seen at memorial events, even though he could no longer walk and had to be transported in a wheelchair.
"Henry was always determined to ensure that today's generation does not forget the sacrifice of those who died on the Western Front," St. Dunstan's said in a statement after his death. "Until recently, he regularly visited schools and attended war-based events as an ambassador for his generation."
Asked once at a memorial ceremony how he would like to be remembered, Allingham brushed off any thought of it, saying people should instead remember those who died in the wars.
"Remember them, not me," he said.
He was made a chevalier in France's Legion of Honor in 2003 and was promoted to officer earlier this year. In awarding him the honor this year, the French ambassador to Britain thanked Allingham on behalf of French President Nicolas Sarkozy for his part in protecting France during both World Wars.
The Royal Navy celebrated Allingham's birthday last month by throwing him a party aboard the HMS President. A birthday cake and card signed by the First Sea Lord was delivered by fast raiding craft of the Royal Marines, and he was given a decanter of Pussers Rum, his "favorite tipple," on behalf of the Fleet Air Arm.
Allingham's wife, Dorothy, died in 1970. Their two daughters both died in their 80s.
He is survived by six grandchildren, 16 great-grandchildren, 21 great-great-grandchildren, and one great-great-great grandchild, all of whom live in the United States, the care home said.
Since 2006, Allingham had lived at St. Dunstan's, a care home for blind ex-servicemen and -women on the southern English coast. He had lost his sight as a result of age-related macular degeneration.
"Everybody at St. Dunstan's is saddened by Henry's loss and our sympathy goes out to his family," said Robert Leader, chief executive at the care home. "As well as possessing a great spirit of fun, he represented the last of a generation who gave a very great deal for us. Henry made many friends among the residents and staff at St Dunstan's. He was a great character and will be missed."
Posted by Padre Steve at 3:42 PM