Our Lady of the Pillar of Saragossa 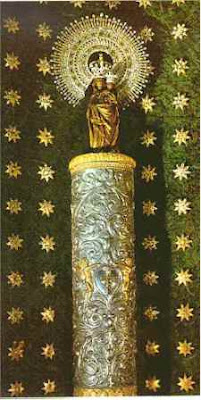 The feast of Our Lady of the Pillar is on October 12, the date of Columbus' discovery of the New World.

After the crucifixion, resurrection and ascension of Jesus, his Apostles began to spread the message he left throughout Israel and shortly thereafter, through the Roman empire.

One of these Apostles, James (the Greater), reportedly traveled as far west as Spain to the village of Zaragoza or Saragossa in north east Spain. While James was there, he became disheartened because of the failure of his mission. Tradition holds that while he was deep in prayer Jesus' Blessed Mother appeared to him and gave him a small wooden statue of herself and a column of jasper wood brought by angels, and instructed him to build a church in her honor:

"This place is to be my house, and this image and column shall be the title and altar of the temple that you shall build... and the people of this land will honor greatly my Son Jesus"

The jasper column and the wooden statue can still be seen at a church that houses them. About a year after the apparition James arranged to build a small chapel in Mary's honor, the first Church ever dedicated to the honor of the Virgin Mary.

This is the first apparition reported of Virgin Mary!

After James returned to Jerusalem, he was executed by Herod Agrippa in about 44 AD, the first apostle to be martyred for his faith.

Several of his disciples took his body and returned it for final burial in Spain. The local queen, observing several of the miracles performed by James' disciples, converted to Christianity and permitted James' body to be buried in a local field.

Eight centuries later, a cathedral in honor of St. James was erected after his gravesite was rediscovered by a local hermit. The hermit found the burial site after noticing an unusual star formation. The site for the cathedral was called Compostella (starry field) , in Galicia, Spain, and it is a major pilgrimage site to this day.

One day a young man named Miguel Juan Pellicer di Calandra had a fairly serious accident. His knee needed to be amputated. He prayed before surgery, and again afterwards, thanking God for still being alive. But he could no longer work and he became a beggar ... Each day when he returned to his home, he would put oil from the lamps in the sanctuary on his scar. Two years and five months after the amputation, after praying to Our Lady of the Pillar as usual, he fell asleep and the next morning he awoke with two legs!

An investigation was conducted and the news of the miracle spread. In 1681, work began to enlarge the sanctuary, which was completed in 1872. To learn more about this beautiful devotion please click here.
Posted by Padre Steve at 6:04 PM

Hello Father, Happy Columbus Day tomorrow, I am going to snatch and cross post this one, :)

Sorry about your Tigers, I am a Cane, I was going for you guys since I despise the Gators, LOL

Sad how they have destroyed, in the PC culture, the memory of the amazing Cristopher Columbus, whom by the will of God, brought progress, true religion and structure to the New World!!!