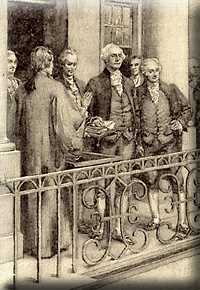 conducts the affairs of men more than those of the United States. Every step by which they have advanced to the character of an independent nation seems to have been distinguished by some token of providential agency; and in the important revolution just accomplished in the system of their united government the tranquil deliberations and voluntary consent of so many distinct communities from which the event has resulted can not be compared with the means by which most governments have been established without some return of pious gratitude, along with an humble anticipation of the future blessings which the past seem to presage. These reflections, arising out of the present crisis, have forced themselves too strongly on my mind to be suppressed.
President George Washington, First Inaugural Address, April 30, 1789

Hat tip to Meet the Founding Fathers.
Posted by Padre Steve at 2:24 PM

Who would have known nowadays that our Founding Fathers believed in God and a Judeo Christian ethos, which under pinned our liberty and our way of life.