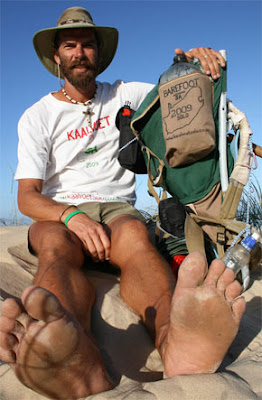 The following comes from the Daily Dispatch site. Hat tip to Spirit Daily:

AFTER clocking up 5000km walking the borders of South Africa barefoot, Jaco Swart says his feet now hurt when he wears shoes. “I had to wear shoes a while back when I went to a funeral and even though I only had them on for a short while, my feet got really sore,” he chuckled.

Trying to escape the baking mid- morning sun by sitting under one of the “few bushes in a moon-like landscape” near Riemvasmaak, Swart told the Daily Dispatch yesterday he had even got married barefoot in December.
After more than 15 months walking the borders of South Africa, Swart is 1500km from home in the barren Northern Cape near the Orange River.

Almost 10 years ago Swart miraculously cheated death by clinging to the side of a cliff in a flooded Storms River gorge for 27 hours.

During the frightening ordeal, which killed 13 clients he had been guiding on a tubing trip, the rugged adventurer made a pact with God that he would walk around South Africa “kaalvoet” – if he made it out alive.

A man with a mission, Swart has kept up his side of the bargain through some of the most extreme and hostile terrain in South Africa – come rain or shine.

By the time he finishes his epic odyssey in Cape Town, “hopefully by June,” Swart would have clocked an estimated 13 million plus steps – all barefoot.

When the Dispatch spoke to Swart in March last year in Port Alfred he said he had refused 82 offers for lifts and 61 offers for shoes – and had been chirped ‘walk Forest, walk’ (in reference to the film Forest Gump) 39 times”.

More than 3000km later, not much has changed. He has however lost count of all offers of generosity. “I have walked through some areas where people warned me that I would have my throat slit if I was not careful. The people have been incredible and I have not had any problems along the way.”
Posted by Padre Steve at 11:43 AM