Pope Benedict: God reveals himself to the humble and the poor


The following comes from the CNA: 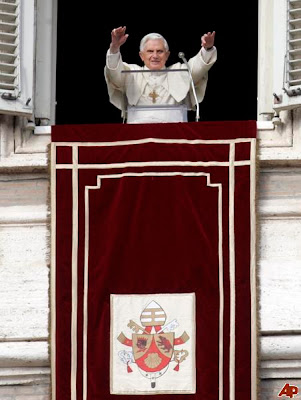 Following his visit to the Roman parish of St. John of the Cross on Sunday, the Holy Father returned to the Apostolic Palace for the Angelus. In his remarks, the Pope underscored the need to see suffering as an opportunity to bring about "a greater good."

As God appears to Moses in the form of the burning bush, said Benedict XVI reflecting on Sunday's Liturgy, he also reveals himself in different ways in the lives of each of us. "To be be able to recognize his presence, however, it's necessary that we bring ourselves to his side with knowledge of our misery and with profound respect."

Otherwise, the Pope said, "we render ourselves incapable of finding him and entering into communion with him."

In this light, he repeated St. Paul's observation that God does not reveal himself to those who are "pervaded by arrogance and thoughtlessness, but to those who are poor and humble before him."

The Holy Father then turned to the Gospel from Luke which takes place following the deaths of some Galileans who were killed by Pontius Pilate, and others who died when the tower of Siloam collapsed.

Pope Benedict said that "Jesus proclaims the innocence of God, who is good and cannot want evil" as the people in the reading attribute the deaths in the community to divine punishment.

"Do you think that they also were greater transgressors than all the men living in Jerusalem?" asked Jesus in the Gospel. "No, I tell you. But if you do not repent, you will all perish similarly.”

In these words, taught the Pope, Jesus invites the perspective of conversion: "misfortunes (and) mournful events should not arouse curiosity or investigation for possible culprits in us, but they should represent occasions to reflect, to win over the illusion of being able to live without God, and to reinforce, with the help of the Lord, the commitment to changing (our) lives."

God, in his fullness of mercy, said Pope Benedict, never stops calling us to come back, to grow in his love, to "concretely" help our neighbors and to live in the joy of grace.

The possibility of conversion, “demands that we learn to read the facts of life in the perspective of the faith, encouraged also by the holy fear of God."

In the midst of suffering and mourning, "true wisdom," concluded the Pope, is being able to realize "the precariousness of existence and reading the human story with the eyes of God, who, wishing always and only the good of his children, for an inscrutable design of his love, sometimes permits us to be tested by pain to guide them to a greater good.

The Holy Father prayed for the aid of Most Holy Mary to bring all Christians back to the Lord and to support us in "our decision to renounce evil and accept with faith the will of God in our lives."
Posted by Padre Steve at 11:52 AM