St. Francis de Sales: Teaching the way of holiness to all 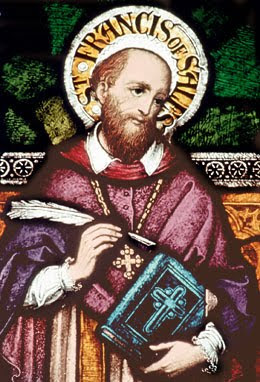 This is a great reflection for the year for priests. Bishop Olmstead plans a series on the great Saint Francis de Sales. The following come from the Catholic Sun:

One of the 33 Doctors of the Church who was immensely popular during his lifetime and remained highly influential ever since is St. Francis de Sales. Born shortly after the Protestant Reformation, this gentle bishop and prolific writer was a central figure in the Catholic Counter-Reformation. Always convinced that more could be achieved through kind persuasion than harsh condemnation, he adopted a pastoral approach that was reflected in a favorite saying: “You can attract more bees with a spoonful of sugar than a cupful of vinegar.” He also wrote, “Souls do not wish to be bullied, but gently brought back; such is the nature of man.”

Renowned for his affable manner and peaceful disposition, one might have expected that Francis de Sales had no enemies and encountered little resistance to his pastoral efforts. That is far from the case.

Ordained a priest in the wake of Protestant Reformation, at the age of 27, Father de Sales was sent into a region known then as the Chablais, south of what is now known as Geneva, Switzerland and north of Annecy, France. The territory had been legally declared Catholic but the local powers-that-be were staunchly Calvinist and firmly determined not to allow the Catholic Church to exercise a renewed influence in the area. Holy Mass could not be offered publicly in the churches, and even practices like the distribution of ashes to begin Lent were forbidden.

Unwilling to be stopped by these threats, Fr. De Sales proceeded to catechize, preach and offer the sacraments to the Catholic faithful, wherever he could gather them together. He also engaged in conversation and debate with ordinary people in public settings, clarifying mistaken notions of the Catholic faith and pointing out erroneous ones of Calvinist teaching. On more than one occasion, he had to flee for his life, as attempts on it were frequent. One time, he barely escaped death by poisoning, warned just in time to recover with only a severely upset stomach.

Jesus told His disciples (Lk 10:3), “Go on your way; behold, I am sending you like lambs among wolves.” The wolves faced by Fr. de Sales in his first years as a priest were Calvinist stalwarts, stirred to a frenzy by the fiery rhetoric sparked by the Protestant Reformation. Often, too, he was attacked by poorly catechized Catholics who were angry about some real problems within the Catholic Church or ones falsely alleged against it.

The secret to Fr. de Sales’ success was a combination of primarily two things: his personal holiness and his gentle manner. Following Jesus’ commandment, he remained a “sheep” of Christ’s flock even as he fulfilled his duties as a shepherd of souls. He resisted the temptation to become one of the wolves. Nonetheless he did stand strong against the lies and misconceptions of his time; and he found a way to avoid being killed while still proclaiming the word of the Lord, not only through tireless preaching but also through his writings. Among his most successful catechetical tools were little pamphlets that he called “Meditations.”

Going against the tide

While he was capable of writing in a densely reasoned and scholarly fashion, Father de Sales preferred a style that was accessible and understandable to ordinary people. Many would never have guessed the years of scholarship and on-going study that lay behind his sermons and writings; he strove to instruct and persuade, not to win praise and fame. His friend and co-founder of the Visitations Sisters, St. Jane Frances de Chantal, said that he “did not talk like a book.” He told amusing stories with humor and simplicity so as to speak to the heart and thus open the way to deeper faith in Christ.

He also wrote thousands of letters, giving advice about prayer and Christian living. Eventually, he collected these and produced his most famous book, “Introduction to the Devout Life.” Packed with practical counsel for ordinary Catholics in daily living, this work proved helpful for soldiers and shopkeepers, for husbands and wives, for kings and statesmen, for young and old alike. He insisted that one’s spiritual regimen needed to be adapted to one’s state in life. The laity should not try to pray like Religious. Soldiers should not long for a daily routine like that of a bishop. Everyone is called to holiness, but not all follow the same path. Still, while taking diverse paths to holiness, all necessarily share in Christ’s cross. As Pope Benedict said, at the recent canonization of St. Damian of Molokai, St. Jeanne Jugan and others, perfect union with Christ “consists in no longer putting themselves at the center but in choosing to go against the tide, living in line with the Gospel.” Francis de Sales often went against the tide, correcting false allegations against Catholicism and defending unpopular but pivotal truths. He was true to his episcopal motto: “To die or to love.”

Do your best, and then forget it

How one responds to adversity speaks volumes of one’s integrity and inner resolve. For Francis de Sales, setbacks were frequent but discouragement never prevailed. When his efforts to preach to former Catholics were prevented, he turned to writing pamphlets and slipping them under doors or leaving them in public places where they might be read. When His apostolic efforts seemed not to bear fruit, he turned greater attention to prayer, especially the rosary, the Memorare and the Eucharist. If even his prayers seemed unanswered, he did not fret. He described his basic attitude as follows: “Do what you have to do as perfectly as you can, but when you have finished, forget it.”

His constant focus in life was quite simple: to do God’s will and not to worry about success or failure. He sought to do this, moreover, with a peaceful disposition, forgetting himself and focusing instead on the needs of others. This attitude gave St. Francis inner freedom to respond to the call of God without hesitation or question. He trusted fully in God’s word (Rom 8:28), “…all things work for good for those who love God, who are called according to His purpose.”

Hat tip to New Advent on this one!
Posted by Padre Steve at 5:01 AM