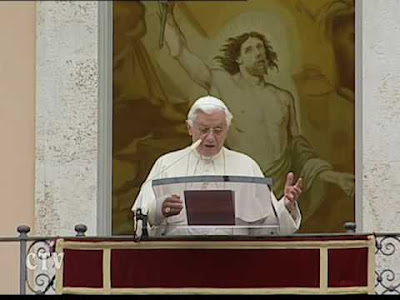 The Holy Father prayed the Angelus with the faithful in St. Peter’s Square today, their numbers increased by pilgrims taking advantage of a long weekend due to the Solemnity of St. Joseph. On the Fifth Sunday of Lent, he offered a perspective on the day’s liturgy in which Jesus condemns the sin and saves the sinner.

Sunday’s Liturgy offers the story of Jesus defending the adulterous woman from the scribes and Pharisees. Wanting to condemn her to death by stoning, they present the case to Jesus’ judgment, wishing also to put him to the test.

“The scene is loaded with drama,” said the Pope at the Angelus, “the life of that person depends on the words of Jesus, but his life does too.”

When the “hypocritical accusers” entrust the case to the judgment of Jesus, “in reality it is actually him that they want to accuse and judge.”

“Jesus, though, is ‘full of grace and truth,’” pointed out the Pope. “He knows the heart of every man, he wants to condemn sin, but save the sinner and unmask hypocrisy.”

Benedict XVI cited the observation of St. Augustine on the Biblical account. Augustine examined the meaning of Jesus’ bending down to write on the earth with his finger while under the insistent interrogation of the accusers.

“This gesture shows Christ as a divine legislator,” he said, alluding also to God’s action of writing the law with his finger on the stone tablets.

“Therefore, Jesus is the Legislator, he is Justice in person.”

Jesus’ words that call for the man without sin to cast the first stone are “full of the disarming force of the truth, that topples the wall of hypocrisy and opens the consciences to a greater justice, that of love, in which consists the full fulfillment of every precept.”

He added, “It is justice that saved also Saul of Tarsus, transforming him into St. Paul.”

As the accusers leave the scene Jesus absolves the woman of her sin, said the Holy Father, therefore giving her “a new life oriented to the good.”

This is the same grace, pointed out the Pope, that later influenced the Apostle’s words to the Philippians, “Just one thing: forgetting what lies behind but straining forward to what lies ahead, I continue my pursuit toward the goal, the prize of God's upward calling, in Christ Jesus.”

“God desires for us only the good and life,” summarized Pope Benedict. “He provides the health for our soul by way of his ministry, freeing us from evil with the Sacrament of Reconciliation, so that no one is lost, but all have a way of repenting.”

He continued with an exhortation to all priests to follow the model of St. Jean Vianney, patron of priests, in the ministry of Sacramental forgiveness, “so that the faithful rediscover the meaning and the beauty, and may be healed by the merciful love of God…”

The Pope concluded by calling for us to learn from Jesus’ example “to not judge and to not condemn our neighbor” and “to be intransigent with sin – starting with our own! – and indulgent with people.

“May the holy Mother of God who, exempt from every fault, is mediatrix of grace for every repentant sinner, help us,” he prayed.

After the Angelus, Pope Benedict recalled the celebration of the 25th anniversary of World Youth Day on Palm Sunday. He said he expects numerous youth at St. Peter’s Square on Thursday to celebrate the milestone in a special encounter.
Posted by Padre Steve at 11:24 AM