Pope Benedict XVI: It is necessary to return to confession 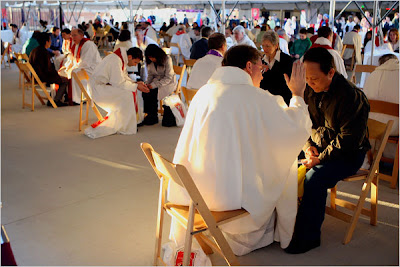 Participants in this week’s course on the hearing Confessions met with the Holy Father in audience on Thursday morning. To the group of priests, Pope Benedict XVI underlined the importance of guiding their flocks "not to conform itself to this world" and the necessity of opening a “dialogue of salvation” with those who seek forgiveness.

Remembering the Cure of Ars, St. Jean Vianney, as having “exercised heroically and fertilely the ministry of reconciliation,” the Holy Father said that priests can learn “not only an inexhaustible trust in the Sacrament of Penance... but also the method of the ‘dialogue of salvation’ that must be carried out in it.”

The roots of this “heroicism and fecundity,” explained the Holy Father, are found “above all, in an intense personal penitential dimension.”

"Awareness of one's own limits and the need to turn to Divine Mercy in order to ask forgiveness, to convert the heart and to find support on the path of saintliness, are fundamentals in the life of priests. Only someone who has himself experienced greatness can convincingly announce and administer the Mercy of God," the Holy Father explained.

Living in a society "marked by the hedonistic and relativistic mentality, that tends to erase God from the horizon of life," does not lend to the development of "a clear framework of reference values does not help to discern good from evil and mature a just sense of sin," the Pope observed.

This, Benedict XVI noted, is not very different from the period in which St. Jean Vianney lived, marked as it was by "a mentality hostile to the faith, as expressed by certain forces that even sought to prevent the exercise of the priestly ministry."

"In these circumstances, the saintly 'Cure of Ars' made 'the church his home' in order to lead men and women to God," the Pope added, "and he appeared to his contemporaries to be an evident sign of God that he encouraged many penitents to come to his confessional".

Thus, the Holy Father urged, "it is necessary for priests to live their own response to vocation 'exaltedly,' because only someone who daily becomes a living and clear presence of the Lord can arouse a sense of sin in the faithful, give them courage and stimulate their desire for forgiveness from God."

There is a necessity for priests to return to the confessional, Benedict XVI emphasized, to ensure that the people "find mercy, counsel and comfort, feel loved and understood by God and experience the presence of the Divine Mercy, alongside the real Presence in the Eucharist."

The Holy Father also touched on the "crisis" of participation in the Sacrament of Penance. He said that this lack of repentance is "an appeal addressed first and foremost to priests and to their great responsibility to educate the people of God in the radical demands of the Gospel. In particular, it calls on them generously to dedicate themselves to hearing sacramental confessions, and courageously to guide their flock not to conform itself to this world, but to make choices that go against the tide, avoiding deals and compromises."

This is the task of the priest, Pope Benedict concluded, to open a "dialogue of salvation" with their penitents, as suggested by the "Cure of Ars." A dialogue that, "arising from the certainty of being loved by God, helps man to recognise his own sin and progressively to introduce himself into a stable process of conversion of heart, which leads to the radical rejection of evil and to a life lived in accordance with God's wishes."

Young priests have been taking part in a conference on Confession promoted by the Apostolic Penitentiary this week in the Vatican. The course is focused on "moral and canonical themes that involve the penitential ministry" and has touched on specific and delicate circumstances such as confession for divorcees and pedophiles.