Cardinal Zen hopeful situation in China will improve for Catholics 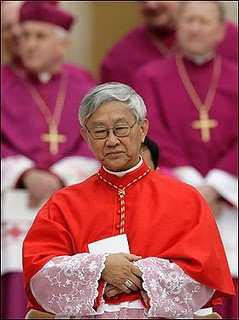 The Bishop Emeritus of Hong Kong, Cardinal Joseph Zen, said this week he hopes the situation for Catholics in China will improve despite the religious freedom difficulties that exist in the country. He added that the testimony of the faithful amidst widespread repression is fundamental for the future of the Catholic Church there.

According to L’Osservatore Romano, Cardinal Zen recently accompanied a group of nine Chinese Salesian sisters at Pope Benedict XVI’s general audience at Castel Gandolfo. Regarding the situation for Catholics in China he said, “It is important to follow the guidelines laid out by the Pope in this 2007 letter to Catholics in China,” which still has not been widely read due to government repression.

The future of the Church in China depends on the silent but efficacious testimony of Catholics in country, the cardinal continued.

Referring to the Salesian sisters, Cardinal Zen said, “The fact that they live amidst the people and are committed to ordinary tasks gives particular weight to their testimony.”
Posted by Padre Steve at 9:57 AM