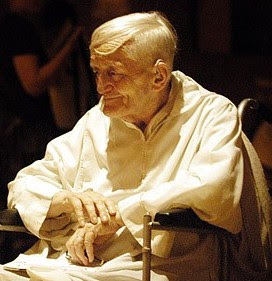 The Taize community is remembering its founding and the death of Brother Roger its founder. The following comes from the CNA:

The Taize community in central France will mark two important anniversaries on Saturday with a prayerful celebration. Five years after their founder's murder, the community works to carry out his vision of reaching out to those seeking to live every day as "a day for God."

Taize community's spokesman, Brother David, told CNA that 5,000 people will be with them for Saturday's celebration of the double anniversary of Br. Roger Schutz' death in 2005 and the 70th year of the community he founded.

Four thousand young people have been there since last Sunday, spending their days taking part in community activities, reflecting on bible verses, praying in a large group three times daily and also completing practical tasks to keep the place running. This is the normal routine for visitors, who come for a week at a time.

Br. David said that while July and August are their busiest months, they host visitors from all Christian backgrounds every week of the year except for the week after Christmas, when they host a celebration in a major city. "For us," he said, "it's kind of a mystery that they come week after week." But, he noted, by word-of-mouth, experiences get passed on and people keep showing up, many to return.

About 1,000 more people from the area will join the 4,000 temporary residents for Saturday's celebration. Beginning evening prayer at 7:30 p.m. in fields close to the village, the participants will make a pilgrimage to the community's Church of the Reconciliation, passing by the Brother Roger's grave on the way. Once at the church they will read and reflect on the Gospel of the resurrection.

Recalling the founder's legacy, the Taize spokesman said, "we are very thankful what Brother Roger gave us. His desire to search ... he hosted many people who came on a search."

He began the community in 1940 as World War II raged, leaving many refugees in need of care and direction. The community, now with around 100 brothers, maintains his original vision of providing a place of reflection for people of all faiths and backgrounds both in Taize and at their five other houses around the globe.

"The point," explained Br. David, "is to help them on this search, listen, answer questions. What we would like is to help them to meet Christ, to discover Christ. ... that they will find for themselves the answers for the questions they bring (with them)."

He remembered that Br. Roger used to stress the importance of remaining rooted in the "essential - in our vocation - and to see the reality, not to be closed in the way we do things, be too formal in the things we do ... to remain faithful to it and live it in the place we are."

The founder would often ask aloud how to better live their faith, being aware of the present and their surroundings to live every day "as a day for God," Br. David described.

"There's a continuity that things not remain locked in place, that every day we can search and his perspective is very important for us," said the spokesman. "The world changes, people change but Christ remains the same."