Pope Benedict: Eucharist is Jesus' greatest gift to us 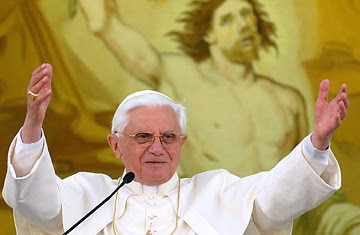 Benedict XVI underscored the importance of the Eucharist on Wednesday as a "treasure whose value cannot be measured." Illustrating a young third century martyr's example of dedication to the Body of Christ, he exhorted altar servers to also give their lives in service to the Lord.

St. Peter's Square was packed for the Pope's first audience after nearly a month of vacation without any public or private audiences. Vatican spokesman Fr. Federico Lombardi estimated the number of people in St. Peter's Square at more than 80,000.

The Holy Father addressed the faithful in German, out of consideration for the native tongue of the great majority of the 53,000 young people present at the audience as part of a pilgrimage of European altar servers.

After donning a white pilgrim's handkerchief himself, he remembered St. Tarcisius in the catechesis. This young boy was martyred in Rome in the year 257 in the act of protecting the Eucharist and is now one of the patron saints of altar servers.

Reflecting on this life given in devotion to God, Pope Benedict told the young people in the square that St. Tarcisius teaches us "the profound love and great veneration that we should have towards the Eucharist.

"It is a precious good," he said, "a treasure whose value cannot be measured, it is the Bread of life, it is Jesus who makes himself food, support and strength for our daily path and open road to eternal life; it is the greatest gift that Jesus left us."

Turning to altar servers everywhere, the Pope exhorted generous service to Jesus in the Eucharist. "It is an important task," he explained, "which permits you to be particularly close to the Lord and to grow as his true friends.

He went on to ask them to protect this friendship as St. Tarcisius did, "ready to give (their) lives so that Jesus might be brought to all," and to be courageous and joyful in communicating it to their friends.

And, while our calling may not be to martyrdom, he said, "Jesus asks faithfulness of us in the small things, the every day tasks, the witness of His love, attending Church and to the many friends with whom we learn to know him ever more. "

Reminded of the significance of their help, present at the altar when the bread becomes Jesus' body and the wine His blood, the Holy Father told them, "You are fortunate to live this great mystery closely!

"Carry out with love, with devotion and with faithfulness your task of serving; prepare yourselves well for the Holy Mass! Helping your priests in the service at the altar you contribute to making Jesus closer, to being ever more present in the world, in everyday life, in the Church and in every place."

He concluded by asking the intercessions of St. Tarcisius and St. John Vianney to aid them in their service.
Posted by Padre Steve at 9:56 AM