Blessed Marianne Cope to be Canonized 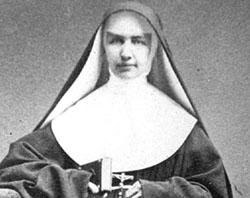 I found this great news at the Deacon's Bench site:

A nun who dedicated her life to caring for exiled leprosy patients is a step closer to sainthood.
The Vatican's Congregation for the Causes of Saints on Tuesday recommended to the pope that Blessed Marianne Cope be canonized, confirming previous rulings that a second miracle was due to her intercession.
In 1888, Cope succeeded Father Damien in caring for leprosy patients banished to the Kalaupapa settlement on Molokai. She died of natural causes in 1918 and was buried there. She could become the second saint with Hawaii ties; Damien gained sainthood in 2009.
"This is like the green light," said Sister Patricia Burkard of Tuesday's action. Burkard, a member of the Sisters of St. Francis of the Neumann Communities in Syracuse, N.Y., hand-delivered a small box holding the reliquary of bone fragments from Cope's remains to Hawaii and toured the islands with the relic in May. It is on permanent display in the Cathedral of Our Lady of Peace in downtown Honolulu.
Mother Marianne, born in Germany and raised in Utica, N.Y., is only of five so-called Blesseds in the country. She was only one of 50 religious leaders to respond positively to an emissary from Hawaii who requested for nuns to help care for Hansen's disease patients on Kalaupapa, the religious order said, earning her the title of "beloved mother of the outcasts."
In 2004, Pope John Paul II declared Mother Marianne "venerable," the first step toward canonization after the Vatican recognized her intercession for the unexplained cure of a New York girl dying of multiple organ failure. The Vatican must authenticate the second miracle for her to be declared a saint, which is expected to happen next year.
For the rest of the story please click here.
Posted by Padre Steve at 10:06 AM