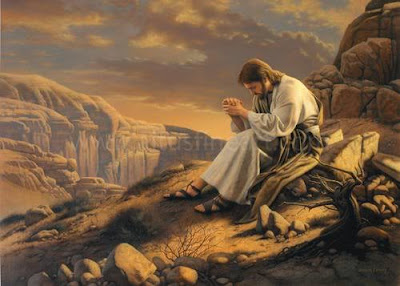 The Pope told pilgrims in the Paul VI Hall that Jesus “by his own example most fully reveals the mystery of Christian prayer.” The Lord's own prayer life, he said, was like “a hidden canal irrigating his life … and guiding him with increasing firmness to the total gift of self, in keeping with the loving plan of God the Father.”

Pope Benedict initially focused on the prayer of Jesus at the time of his baptism in the River Jordan.

He explained that Christ, who was without sin, chose to be baptized to show his “solidarity with people who recognize their sins, who chose to repent and change their lives.” In doing so, Jesus “helps us to understand that being part of the people of God means entering into a new life, a life in conformity with God.”

This conformity with God comes in prayer, for it was “through prayer” that “Jesus lives in uninterrupted contact with the Father in order to achieve His project of love for mankind,” said the Pope.

For Jesus, “prayer enters into all stages of His ministry and into every day of His life,” so much so that it was never interrupted by fatigue.

On contrary, said the Pope, “the Gospels make it clear that Jesus was wont to spend part of the night in prayer,” and that this increased as he encountered decisions of greater magnitude.

The Pope stressed that while Jesus in his humanity learned to pray from “his Mother and from the Jewish tradition,” the “source of his prayer is his eternal communion with the Father.” Therefore, as “the incarnate Son,” Jesus “shows us perfectly how to pray as children of the heavenly Father.”

This divine example of fidelity to prayer challenges each one of us “to examine the time and effort we devote to our own prayer,” so that in our lives we recognize “the importance of the prayerful reading of Holy Scripture,” as well as the need for “listening, meditating and remaining in silence before the Lord,” which is “an art we learn through constant practice.”

Pope Benedict also encouraged Christians to give witness to prayer in a world that “often remains closed to the divine, to the hope which leads to the encounter with God.”

He finished his reflection by asking that the faithful “maintain an intense relationship with God, to pray, not intermittently but constantly and faithfully, so as to illuminate our lives as Jesus taught us.”
Posted by Padre Steve at 1:09 PM