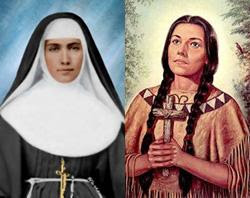 Pope Benedict XVI formally recognized miracles attributed to Bl. Marianne Cope and Bl. Kateri Tekakwitha on Dec. 19, clearing the way for both women to be canonized.

The two women, who both lived in the United States, were among numerous individuals whose sainthood causes were advanced by decrees authorized by Pope Benedict XVI on Monday.

Sister Grace Anne Dillenschneider, vice postulator for the Cause for the Diocese of Syracuse, told CNA on Dec. 19 that the date for Bl. Cope’s canonization has not yet been confirmed.

The Congregation for the Causes of Saints had already approved Bl. Cope’s second official miracle, which involved the medical recovery of a woman in Syracuse who was cured of a fatal and irreversible health condition.

Born in western Germany in 1838, Bl. Marianne Cope entered religious life in Syracuse, N.Y., where she served as a teacher and principal and established two hospitals before traveling to Hawaii, where she spent several years caring for lepers.

Bl. Kateri Tekakwitha, known as "the Lily of the Mohawks," was born in 1656 in upstate New York.

Her father was a Mohawk chief and her mother was an Algonquin who was raised Catholic.

A smallpox epidemic killed both of her parents and left her with poor eyesight and a badly disfigured face at a young age.

Despite objections from her relatives, she was baptized at age 20, after meeting several Catholic priests.

An outcast from her community, Bl. Tekakwitha lived a life of deep prayer, with a strong devotion to the Blessed Sacrament.

She died in 1680 at the age of 24. Witnesses said that the scars on her face disappeared after her death.

Bl. Tekakwitha was beatified by Pope John Paul II in 1980, the first Native American to be declared blessed.

On Dec. 19, Pope Benedict also authorized promulgations recognizing miracles attributed to the intercession of 10 other individuals, allowing them to move forward towards beatification or canonization.

In addition, he recognized the martyrdom of more than 60 individuals, including priests, religious and laymen, who can now move forward in the process towards beatification.

The Pope also approved decrees recognizing seven individuals as having lived out heroic virtue and being venerable. These individuals will each need a miracle attributed to their intercession before they can be beatified.
Posted by Padre Steve at 8:01 AM