Pope Benedict reflects on Jesus’ relationship with ‘the childlike’ 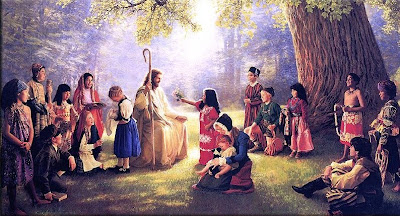 Pope Benedict XVI told pilgrims at today’s general audience that through prayer Jesus calls the “childlike” into a loving relationship with him and the Father.

In his “cry of exultation,” Jesus “gives thanks to the Father because he has willed to reveal the mystery of salvation not to the wise and learned, but to the ‘little ones,’” the Pope told several thousand pilgrims gathered in the Vatican’s Paul VI Audience Hall on Dec. 7.

Pope Benedict continued his weekly catechesis on prayer with a mediation on the “jewel” of Christ’s prayer, his “Hymn of Joy,” which is found in the Gospels of St. Matthew 11:25-30 and St. Luke 10:21-22.

This prayer, he said, is the “apex of a path of prayer in which Jesus’ profound and intimate communion with the Father in the Holy Spirit and His divine sonship clearly emerges.”

At the beginning of the Scripture passages in question, Jesus says, “I praise you, Father, Lord of heaven and earth.” This form of address has a twofold meaning, explained the Pope.

First, it shows "Jesus’ awareness and certainty of being ‘the Son’ in close and constant communion” with the Father. This, he said, is the “central point and source of Jesus’ every prayer.”

The second meaning is that it “recalls the great biblical narrative of the history of God’s love for human beings that began with creation.” Jesus, said the Pope, is the “summit and fulfillment” of “this story of love.” Thus, through his use of the phrase “Lord of heaven and earth” we also “recognize how Jesus is the one who reveals the Father,” as well as “the possibility of access to God” to humanity.

Pope Benedict also reflected on how God’s divine revelation does “not occur within earthly logic,” which would say that it is “the wise and powerful who posses important knowledge and transmit it to those who are more simple.” No, God’s logic turns that on its head as “his communication is addressed precisely to the ‘childlike.’”

This childlike state consists of nothing less than a “pureness of heart” that “allows us to recognize the face of God in Jesus Christ.”

“It is keeping our hearts as simple as those of children, without the presumptions of those who are locked in themselves, thinking they have no need of anyone, not even God,” he said.

Jesus concludes his prayer with the offer of rest to those who are “weary and burdened,” because his “yoke is easy” and “burden is light.”

The Pope observed that in his prayer, Jesus asks that “we go to Him, the true wisdom” since the “yoke” he speaks of is “neither a doctrine to learn nor an ethical proposal, but rather a Person to follow: He himself, the only-begotten Son, in perfect communion with the Father.”

This means that “we also can address God with the confidence of sons and daughters,” said the Pope.

And when we call God “Father” when we pray, the Pope taught, we also “have to keep the heart of a child, the heart of those ‘poor in spirit,’ in order to recognize that we are not self-sufficient, but that we need God, that we have to seek Him, listen to Him, speak to Him.”

Through prayer, he said, we open ourselves to receiving this gift from God, “his wisdom who is Jesus himself, in order to accept the will of the Father in our lives and to find consolation in the weariness of our journey.”

At the end of today’s audience, Pope Benedict wished pilgrims a happy feast day ahead of tomorrow’s Solemnity of the Immaculate Conception, a national holiday throughout Italy.

The day should remind us of “Mary's singular acceptance of God's salvific plan” and that she was “preserved from any stain of sin in order to be the holy dwelling place of the Incarnate Word, she always trusted fully in the Lord,” he said.

The Pope then concluded his audience by leading pilgrims in the singing of the Pater Noster, before imparting his apostolic blessing.
Posted by Padre Steve at 9:38 AM