George Weigel: The Bishop of Rome as Christian Radical 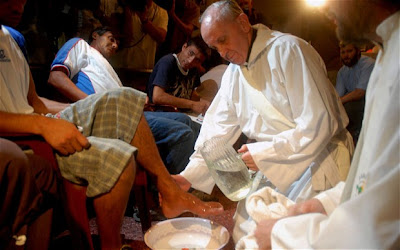 The following comes from First Things:


It was a brief greeting to former colleagues. But if you read Pope Francis’ recentletter to the Argentine bishops’ conference closely, you get a glimpse of the man, his convictions, and his vision.
First, the man: Jorge Mario Bergoglio has remained very much himself, rather than adopting what some might deem the pontifical style. Any pope who can write his former colleagues in these terms—“Dear Brothers: I am sending these lines of greeting and also to excuse myself for being unable to attend due to ‘commitments assumed recently’ (sounds good?)”—is a man at home in his own skin, and one likely to remain that way.
Then, the convictions: Pope Francis believes that the Church in Latin America took a decisive step toward a new future in 2007. Then, at the Fifth General Conference of the Bishops of Latin America and the Caribbean, held at Aparecida in Brazil, the leaders of the Church moved far beyond the “kept” Catholicism of the past—the Catholicism that was “kept” by legal establishment or, more recently, cultural habit—and embraced a robustly Evangelical Catholicism in which, as the pope wrote, “the whole of ministry (is) in a missionary key.”
The move from “kept” Catholicism to Evangelical Catholicism is for everyone, the pope seems convinced. “Kept” Catholicism has no future anywhere, and not just because of aggressive secularism and other corrosive cultural acids. “Kept” Catholicism has no future because it doesn’t merit a future: or, as the pope put it to his former colleagues, “a Church that does not go out, sooner or later gets sick” in the hothouse atmosphere of its own self-absorption, which Francis has also called “self-referentiality.”
When the Church is about itself, rather than the gospel and the invitation to friendship with the Lord Jesus Christ, the Church betrays the gospel and the Lord. How? The “self-referential Church” falls victim to “a kind of narcissism that leads to spiritual worldliness and to sophisticated clericalism,” which in turn are obstacles to what the bishops at Aparecida called “the sweet and comforting joy of evangelizing.”
That joy, Pope Francis quickly added, is “many times united to the Cross.” But the joy that comes from the embrace of the Cross helps the ordained ministers of the Church “to be each day more fruitful, spending ourselves and unraveling ourselves in the service of the holy faithful people of God.” And if the pastors are seen to pick up the Cross and live joyfully in the embrace of the Crucified and Risen Lord, the people of the Church will find the courage to do the same: thus the entire Body of Christ becomes a powerful witness to the truth that it is in self-giving, not self-assertion, that we find happiness.
As for the pope’s vision, Francis seems willing, even eager, to lead a Church that takes risks in boldly proclaiming the gospel. “It is true,” he wrote the bishops of Argentina, that “something can happen” to a Church that “goes out,” just as things can happen to someone who leaves the safety of home: Accidents can happen. But “I wish to say to you frankly,” the pope continued, “that I prefer a thousand times an injured Church than a sick Church,” a risk-taking Church to a Church palsied by self-absorption. Thus the vision toward which this pope “from the end of the earth” is calling the entire Church: all Christ, all gospel, all mission, all the time.
The Bishop of Rome as Christian radical is going to take some getting used to. Expect serious disorientation in those ideological redoubts where the old battles over the now-superseded Church of the Counter-Reformation remain all-consuming (e.g., the Leadership Conference of Women Religious and the Lefebvrists). Some may find it hard to reconcile Christian radicalism with orthodoxy. But, as I argue inEvangelical Catholicism: Deep Reform in the 21st-Century Church, that’s precisely what orthodoxy is: the adventure of radical conversion ordered to mission. The 266th Bishop of Rome would seem to agree.
Posted by Padre Steve at 11:30 AM