Pontificate of Pope Francis consecrated to Our Lady of Fatima 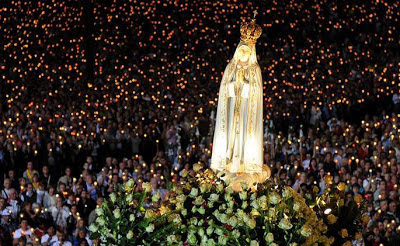 (CNA/EWTN News).- At the Holy Father’s personal request, Cardinal Jose Polycarp, the Patriarch of Lisbon, consecrated the pontificate of Pope Francis to Our Lady of Fatima on her feast day.

Addressing Our Lady of Fatima during the ceremony, Cardinal Polycarp said, “Grant (Pope Francis) the gift of discernment to know how to identify the paths of renewal for the Church, grant him the courage to not falter in following the paths suggested by the Holy Spirit, protect him in the difficult hours of suffering, so that he may overcome, in charity, the trials that the renewal of the Church will bring him.”

In statements to CNA, Vatican spokesman Father Federico Lombardi said, “As we know, an important celebration takes place on May 13 in Fatima during which it is normal that the pontificate be entrusted to Our Lady of Fatima.”

The consecration took place at the Portuguese shrine dedicated to Our Lady, with thousands of the faithful present.

Cardinal Polycarp recalled that Popes John Paul II and Benedict XVI visited Fatima and expressed his desire that Pope Francis do so as well.

“From here, at this altar of the world, he will be able to bless humanity, to make the world of today feel that God loves all men and women of our time, that the Church loves them and that you, Mother of the Redeemer, lead them with tenderness on the paths of salvation,” the cardinal said.

The path of Church renewal leads to a “rediscovery of the relevance” of the Fatima message and of the need to “converse with God,” he explained.

“Contemporary humanity needs to feel loved by God and by the Church,” Cardinal Polycarp said. “If humanity feels loved, it will overcome the temptation to violence, materialism, estrangement from God, loss of direction, and it will be able to advance towards a new world in which love will prevail.”
During the Mass, Bishop Antonio Marto of Leiria-Fatima read a message from Pope Francis to the Apostolic Nunciature in Portugal.

“The Holy Father said he was pleased with the initiative and expressed deep acknowledgment for satisfying his desire united in prayer with all the pilgrims of Fatima, upon whom he whole-heartedly confers the apostolic blessing,” the message stated.