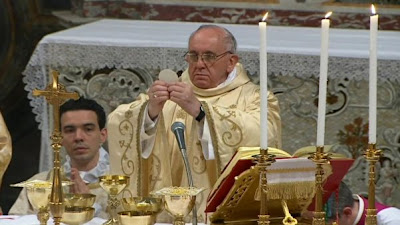 The biggest threat to priests is the temptation to be more immersed in the world than the Gospel, says Pope Francis in his newly translated book.

“For then-Cardinal Bergoglio, narcissism and worldliness are completely self-defeating to the purpose of why a priest becomes a priest,” the book's translator, Alejandro Bermudez, told CNA April 23.

“It's a total rejection of the reason why he decided to become a priest, and therefore these are some of the most destructive and damaging problems in priestly formation.”

The new book, “On Heaven and Earth,” is a conversation between Pope Francis and Abraham Skorka, a rabbi and scholar from Buenos Aires. It was originally published in Spanish in 2010, when the Pope was still Cardinal Jorge Bergoglio, archbishop of Buenos Aires.

The book covers numerous topics touching on priesthood in today's world, including vocation, celibacy and the sex abuse crisis.

Bermudez, who is executive director of Catholic News Agency, said that though Pope Francis warns against worldliness in all Christians, “he makes a much more important point regarding the priests, because they have the duty to lead the Catholic community, and lead it in a completely selfless manner.”

“One might think that having a woman on the side is being worldly, but that is only one of the double lives that are usually mentioned,” Pope Francis said in the book. “There are those that seek to compromise their faith for political alliances or for a worldly spirituality.”

Pope Francis noted the 20th century theologian Henri de Lubac's comment that to be worldly is “the worst that can happen” to a priest. “If this were to happen throughout the Church, the situation would be much worse than those embarrassing periods with libertine pastors,” he said.

“Worldliness and the narcissism can become not only an attitude of individuals but of the whole community, and therefore you can have the whole leadership of Catholics – bishops, priests and lay leaders – involved,” said Bermudez.

This would “basically turn the Church into a narcissistic worldly operation, and it would be completely neutralized of any capacity to transform persons and the world,” he explained.

In “On Heaven and Earth,” Pope Francis discusses priestly celibacy with such phrases as “for now” and “for the time being.” This has led some to speculate that he will bring to an end to the Latin Church's tradition of unmarried priests.

However, Bermudez asserted that Pope Francis will do “absolutely nothing” to change the rules on married priests.

“That doesn't mean at all that he is soft on this, or even contemplating the possibility of not continuing the tradition of priestly celibacy,” the translator said. “The book in itself, his pastoral practice and his homilies all speak to the great appreciation he has of priestly celibacy.”

Pope Francis also said that “we can rule out that celibacy carries pedophilia as a consequence.” He noted that most sex abuse occurs in families and neighborhoods by those who have not taken a vow of celibacy.

“Now, when this happens, you can never turn a blind eye. You cannot be in a position of power and destroy the life of another person,” the Pontiff stressed.

“I do not believe in the positions that some hold about sustaining a certain corporate spirit so as to avoid damaging the image of the institution … Recently, in Ireland they uncovered cases that occurred for twenty years, and the current pope (at the time Benedict) clearly said: 'Zero tolerance with this crime.' I admire the courage and the straightforwardness of Benedict XVI on this point.”

Since his election as Bishop of Rome, Francis has reaffirmed the Vatican process established by Benedict for handling instances of sexual abuse by priests.
Posted by Padre Steve at 5:30 AM