“We will all die for Jesus Christ; we willingly die so as to not renounce his holy faith” 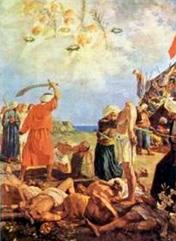 The following comes from The Catholic Herald:
Pope Francis is preparing to canonise an estimated 800 Italian laymen killed by Ottoman soldiers in the 15th century. The canonisation service will be on May 12 in St Peter’s Square and it will be the first carried out by the Pontiff since he was elected in early March.
The killing of the martyrs by Ottoman troops, who launched a weeks-long siege of Otranto, a small port town at the most eastern tip of southern Italy, took place in 1480.
When Otranto residents refused to surrender to the Ottoman army, the soldiers were ordered to massacre all males over the age of 15. Many were ordered to convert to Islam or die, but Blessed Antonio Primaldo, a tailor, spoke on the prisoners’ behalf. “We believe in Jesus Christ, Son of God, and for Jesus Christ we are ready to die,” he said, according to Blessed John Paul II, who visited Otranto in 1980 for the 500th anniversary of the martyrs’ deaths.
Primaldo inspired all the other townspeople to take courage, the late Pope said, and to say: “We will all die for Jesus Christ; we willingly die so as to not renounce his holy faith.” There were not “deluded” or “outdated,” Blessed John Paul continued, but “authentic, strong, decisive, consistent men” who loved their city, their families and their faith.
The skulls and other relics of the martyrs currently adorn the walls around the altar of Otranto Cathedral as a memorial to their sacrifice. According to the archdiocese’s website, popular tradition holds that when the soldiers beheaded Primaldo, his body remained standing even as the combatants tried to push him over. Legend has it that the decapitated man stood until the very last prisoner was killed, at which point Primaldo’s body collapsed next to his dead comrades.
In 1771, the Church recognised the validity of the local veneration of Primaldo and his companions and allowed them to be called Blessed. In 2007, retired Pope Benedict XVI formally recognised their martyrdom and, in 2012, he recognised a miracle attributed to their intercession. Martyrs do not need a miracle attributed to their intercession in order to be beatified. However, miracles must be recognised by the Vatican in order for them to become saints.
The miracle involved the late-Poor Clare Sister Francesca Levote. She was suffering from a serious form of cancer but was healed after a pilgrimage to pray before the martyrs’ relics in Otranto in 1980, a few months before Pope John Paul’s visit in October. She died in February 2012 at the age of 85.
In a letter published in December 2012, Archbishop Donato Negro of Otranto said that the martydom of the townnsfolk must represent a “purification of the memory of the Catholic Church and a rooting out of every possible lingering resentment, rancor, resentful policies, every eventual temptation toward hatred and violence, and every presumptuous attitude of religious superiority, religious arrogance, moral and cultural pride.”
Remembering Christian martyrs is an occasion to examine one’s own life and make sure it corresponds with the Gospel call to love and forgive, he added.
Posted by Padre Steve at 12:00 AM