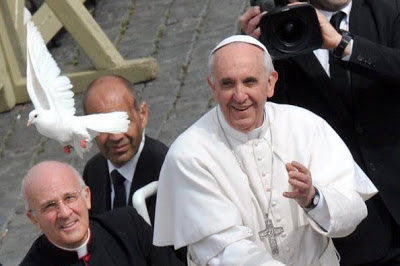 The following comes from the Telegraph UK:

Cardinal Christoph Schönborn, the Archbishop of Vienna, who was himself widely tipped as a possible successor to Pope Benedict, said he had personally had two “strong signs” that Cardinal Jorge Mario Bergoglio was “the chosen one” in the run up to vote.
He said only divine intervention could explain the speed with which the Argentine Cardinal - who did not feature on any of the main lists of likely candidates compiled by Vatican experts - was elected.
Speaking to an Anglican conference in London, he also said the Archbishop of Canterbury, the Most Rev Justin Welby, had a “strange similarity” to the new Pope.
He said that the two elections were a “little miracle” and a “sign from the Lord” that the two churches should work towards closer unity.
Addressing an audience of 5,000 people in the Royal Albert Hall, at a conference organised by the prominent Holy Trinity Brompton church in west London, he said that he was certain that on the evening of March 12, as the papal Conclave began, none of the Cardinals had known who would be chosen.
“It was a tremendous experience of the Holy Spirit,” he said.
“We were driven by the Holy Spirit to this man – he was sitting in the last corner of the Sistine Chapel: This man he is the chosen one.”
He added: “I received at least two strong signs: one I can tell, the other was in the Conclave I can’t speak about – but real signs of the Lord giving me indication ‘he is the one’.”
The Cardinal said that just after a special mass before the Conclave began he came across a couple from Latin America who are friends of his.
He said: “I met them outside the Basilica and I asked: ‘You have the Holy Spirit, can you give me advice for the Conclave that will start in a few hours?’
“And the woman whispered in my ear ‘Bergoglio’, and it hit me really: if these people say Bergoglio, that’s an indication of the Holy Spirit.
“And I’m sure many of us have received similar signs during the Conclave, it wouldn’t have been possible to have this election so soon and so rapidly.”
To applause, the Cardinal went on: “You know there is a strange similarity with your Archbishop Justin, I hope so much that they will meet soon.”
Laughing, he added: “I don’t know the secrets of the ‘conclave’ at Lambeth Palace.
“But it looks like a little miracle that he became the Archbishop, so I think the Lord as given us a great sign through these two elections and other signs and what I have deeply in my heart … it is as if he would say to the world ‘come home, I wait for you’.”
Posted by Padre Steve at 9:18 AM