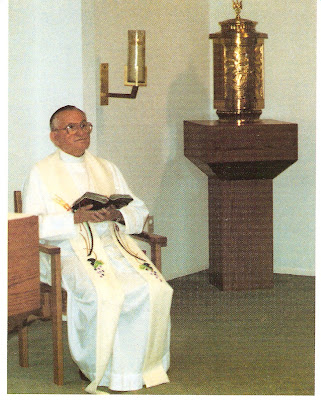 Fr. Frank Klauder, SDB was a wonderful, saintly priest who touched the lives of hundreds of Salesians and seminarians over the course of his many years of teaching. Fr. Frank died a saintly death on January 28, 2000 surrounded by his Salesian confrere. He was a man who loved Jesus Christ, had tremendous devotion to the Mother of God, loved Don Bosco and the Salesian charism! He was a man on fire with love for the Church and the Holy Father! It was that love for the Church and the Holy Father that prompted Fr. Frank to reflect profoundly upon the dreams of Don Bosco and their importance for our own time. He felt that Don Bosco's dreams or prophecies were unfolding before our eyes. This was especially true in the last 20 years of his life. I have included below Fr. Frank's article on Don Bosco's dream of the 200 day march. This article was originally published in Soul Magazine and has been posted on EWTN's website as well.

The Biographical Memoirs of Saint John Bosco provide us with a number of prophecies, which the saint disguised as "dreams," which have always stirred interest in the readers of his biography.

Well known is the saint's "dream of the two columns" where Don Bosco foresaw the future difficulties of the Church, envisioned as a ship on stormy seas. Several popes strive to moor the Church and anchor it between two columns which arose amid the dangerous waters. The columns symbolized the two devotions to Jesus in the Blessed Sacrament and to Mary Immaculate, the Help of Christians, Calm and peace for the Church is won only when one of the popes finally succeeds in anchoring the Church between the two columns.

The dream has great symbolic significance and can be interpreted in several ways, while maintaining the essential meaning that the Church's future is guaranteed through Peter's ministry and through fidelity of the faithful to the two devotions to Jesus and Mary.

Another symbolic dream is the less-known "march of the 200 days," which can shed light on interpreting dream of the two columns. The account of this dream is given in the tenth volume of the Biographical Memoirs (pp. 49-59) in the context of "three prophecies," whose details need not delay us here.

The "first prophecy" ends as follows:

"There shall yet come a violent hurricane. Iniquity is at an end, sin shall cease, and before two full moons shall have shone in the month of flowers, the rainbow of peace shall appear on earth ... Throughout the world a sun so bright shall shine as never seen since the flames of the Cenacle until today, nor shall it be seen again until the end of time."

I will return to this prophecy at the very end of the article. It is the second prophecy that especially concerns us here.

It reads in part as follows:

"It was a dark night, and men could no longer find their way back to their countries. Suddenly a most brilliant light shone in the sky, illuminating their way as at high noon. At that moment from the Vatican came forth, as in procession, a multitude of men and women, young children, monks, nuns, and priests, and at the head was the pope.

"But a furious storm then broke out, somewhat dimming that light, as if light and darkness were locked in battle ...

"The ranks of the procession thinned considerably. After a two-hundred-day march, all realized that they were no longer in Rome. In dismay they swarmed about the Pontiff to protect him and minister to him in his needs.

"At that moment two angels appeared, bearing a banner which they presented to the Supreme Pontiff, saying: "Take the banner of her who battles and routs the most powerful armies on earth. Your enemies have vanished; with tears and sighs your children plead for your return."

"One side of the banner bore the inscription: 'Queen conceived without sin' and the other side read: 'Help of Christians.'

"The Pontiff accepted the banner gladly, but he became very distressed to see how few were his followers.

"But the two angels went on: 'Go now, comfort your children. Write to your brothers scattered throughout the world that men must reform their lives. This cannot be achieved unless the bread of the Divine Word is broken among the peoples. Teach children their catechism and preach detachment from earthly things. The time has come,' the two angels concluded, 'when the poor will evangelize the world. Priests shall be sought among those who wield the hoe, the spade, and the hammer, as David prophesied: 'He raises up the lowly from the dust; from the dunghill he lifts up the poor. To seat them with princes, with the princes of his own people' (Ps 113:7-8).

"On hearing this, the Pontiff moved on, and the ranks began to swell.

Upon reaching the Holy City, the Pontiff wept at the sight of its desolate citizens, for many of them were no longer. He then entered Saint Peter's and intoned the Te Deum, to which a chorus of angels responded, singing: 'Glory to God in the highest, and peace on earth to men of good will.'

"When the song was over, all darkness vanished and a blazing sun shone...

"From the start of the exile until the intoning of the Te Deum, the sun rose two hundred times. All the events described covered a period of four hundred days."

Regarding this mysterious dream, I offer the following interpretation, suggested in part by a layman:

2. The two hundred "days" refer to sixteen and a half years;

3. The first "brilliant light" before the beginning of the procession or march refers to Vatican Council II, which ended in 1965;

4. The "furious storm" that broke out refers to the controversies that arose after the council;

5. The end of the first two hundred "days" or sixteen-and-a-half years, brings us to 1982, when the Pope visited Fatima, one year after the attempted assassination on his life. At that time, speaking, in the third person the Pope said:

"Today John Paul II reads the message of Fatima again, with trepidation in his heart, because he sees how many people and societies-how many Christians have gone in the opposite direction to the one indicated in the message of Fatima. Sin has made itself firmly at home in the world, and the denial of God has become widespread in the ideologies, ideas, and plans of human beings."

Before concluding his talk, the Pope recited a prayer, called "apocalyptic" by the New York Times, as follows:

"From famine and war, deliver us.

From nuclear war, from incalculable self-destruction, from every kind of war, deliver us.

From sins against the life of man from its very beginning, deliver us.
From hatred and from the demeaning of the dignity of the children of God, deliver us.

From every kind of injustice in the life of society, both national and international, deliver us.

May your Immaculate Heart reveal for all the light of Hope."

It was at this time that John Paul renewed the consecration of the world and Russia to the Immaculate Heart of Mary, having invited the bishops of the world to join him in a collegial manner and thus complying completely with one of the requests of the Fatima message. Two years later, in 1984, he repeated the same consecration. Events thereafter (1989) witnessed the collapse of the Communist regimes in Eastern Europe.

7. The splendid era of peace, with which "the first prophecy" ends refers to the era of peace promised by Our Lady at Fatima, and which is being gradually prepared by the papal initiatives for the third millennium.

In conclusion, the future is bright with promise, provided that we heed the voice of the Holy Father. Our era is in need of moral reform, which will require work and prayer on the part of all Christians. For Catholics, an important part of this endeavor is fidelity to the Holy Rosary, which has always been Our Lady's "weapon of victory."
Posted by Padre Steve at 8:53 PM