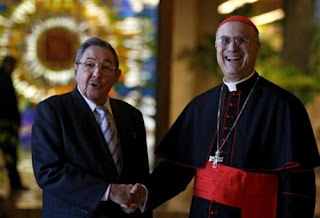 Sometimes its good to be surprised! I was very surprised to read that Cuba (yes, that Cuba!) has invited a group of Benedictines to found a monastic community in their country. Just last week our Salesian Cardinal Tarcisio Bertone visited the country on behalf of Pope Benedict. The visit was prompted by the 10th anniversary of Pope John Paul's visit to Cuba. We have to pray for the success of this new community. The people of Cuba and the Church there could use some good news and hope. I will include the story here that I read on Earth Times: Cuba has invited the Catholic Church to open a new monastery on the island and a German Benedictine order said Wednesday it would send four monks to establish a "spiritual centre."The church has been officially banned in the past from building new churches on the communist island.

The four monks will be provided by the Missionary Benedictines, also known as the Ottilien Congregation, an order of monks with its world headquarters at Landsberg am Lech, west of Munich.

The new site will be in the archdiocese of Havana, the order's spokesman said.

The foundation had been requested by the archbishop, Cardinal Jaime Lucas Ortega y Alamino, and had been expressly approved by Fidel Castro before his retirement last month as Cuban leader.

The spokesman said Cuban authorities had been helpful in the preparations to set up the monastery, which was likely to open this year.

One of the monks would come from the headquarters abbey, St Odilia at Landsberg, where 110 men practise manual trades as part of their religious vows. The order is a splinter from the Benedictines, the Catholic Church's oldest religious order.

It was understood that Castro had insisted that one of the four monks with farm experience be skilled in cheese-making. The "Maximo Lider" as he is known in Cuba is said to be fond of cheese.

The spokesman said Cardinal Ortega hoped the Benedictines would give the church in Cuba "fresh spiritual impetus."

The church has been banned for decades from the Cuban media, but last month Cuban state-controlled television broadcast live a mass celebrated in Havana's cathedral square by Cardinal Tarcisio Bertone, the visiting Vatican secretary of state.

Bertone visited Cuba February 20-26 to commemorate the 10th anniversary of the late Pope John Paul's trip to the island.
Posted by Padre Steve at 12:38 PM

I'm sorry but as a Catholic I think it's shameful that the first country to literally bless the monarchical succession of the a despotic anti-religious regime in Havana was the Vatican. Why is Cardinal Bertone photographed shaking hands with a murderer (And Raul Castro has been killing since the mid 50s) instead of advocating on behalf of Catholic political prisoners like Dr. Oscar Elias Biscet.

Makes me think that Martin Luther was on to something.