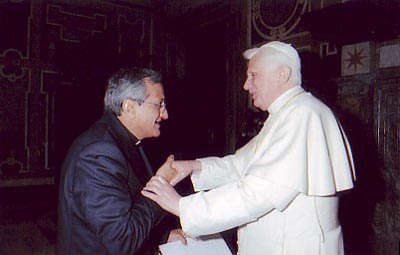 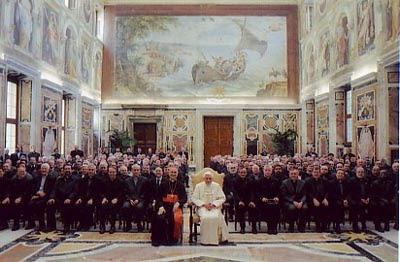 The following article was posted by the Catholic World News today:

Vatican, Mar. 31, 2008 (CWNews.com) - Pope Benedict XVI (bio - news) met on March 31 with the participants in the 26th general chapter of the Salesian order, and encouraged them to "reawaken apostolic passion in each individual Salesian."

The Holy Father-- who had returned to the Vatican the previous evening after resting for several days after Easter at Castel Gandolfo--- told the Salesians that their religious community should emulate their founder Don Bosco, showing the same "faithful abandonment to the Father and dedication to the evangelical mission."

That mission is doubly important today, the Pontiff continued, because of "the process of secularization that is gaining ground in modern culture." He cautioned that the effects of secularization can be evident even within religious orders, and warned against "lifestyles that risk weakening evangelical witness."

Noting the Salesians' involvement in educational projects, the Pope said that the world of schooling is facing its own crisis, "a crisis of trust in life which, in the final analysis, is a lack of trust in God Who called us to life." He said that to counteract that trend, Salesian educators must help to strengthen the families of their students and ensure the proper formation of their own community members.

The general chapter of the Salesians had spent most of the month of March in its meetings, which culminated with the re-election of Father Pascual Chavez Villanueva as rector-general of the order.

Hey Fr. Steve. Where do you get all this news? I think it's great! keep it up. Thanks