In 1956 Soviet leader Nikita Khrushchev famously said to the USA and her allies "Whether you like it or not. History is on our side. We will bury you!" Many knees trembled at these words. Khrushchev had promised to bring an end to Christianity and even boldly promised to show the last Orthodox priest on television. While he did close and destroy 30 percent of the churches and monasteries in Russia we know that Khrushchev failed in his attempt to bury the USA and to bury faith! Khrushchev spent the last 7 years of his life under the watchful eye of the KGB as he had been deposed as President. Some years later, in 1983, President Ronald Reagan called the Soviet Union an evil empire. Many around the world condemned him for calling the Soviets "evil". Many in our own time don't believe that evil exists at all. This was true back in 1983 as well. At the Brandenburg Gate of West Berlin, Germany on June 12, 1987 President Reagan made a great challenge to then Soviet President Mikhail Gorbachev. He challenged him to "tear down this wall!" Again, many in the media were critical. But by November 9, 1989 that wall did come down! The sweep of democratic reforms across Eastern Europe was nothing short of miraculous. Many wondered why Gorbachev didn't respond as earlier Soviet leaders before him like Khrushchev or Brezhnev. Some suspected that Gorbachev might actually have Christian faith. Many understandably found that hard to believe. However, now we are finding out more about what may have motivated Gorbachev at the time. Peter Robinson of the National Review online wrote an article about the recent visit on March 19th of Mikhail Gorbachev to the Tomb of St. Francis in Assisi. During that visit Gorbachev formally announced that he was a Christian. He stated that "St Francis is, for me, the alter Christus, the other Christ. His story fascinates me and has played a fundamental role in my life." He added, "It was through St Francis that I arrived at the Church, so it was important that I came to visit his tomb." 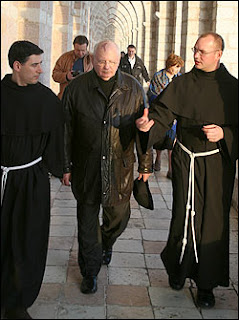 You can read the London Telegraph article here. Miracles do happen! We need to pray that we have the eyes to see them! During this holy season of Easter let's continue to pray that the light of faith continues to shine in our hearts that others might come to see the truth that can't be buried. The truth has risen from the tomb! Alleluia!
Posted by Padre Steve at 12:15 PM