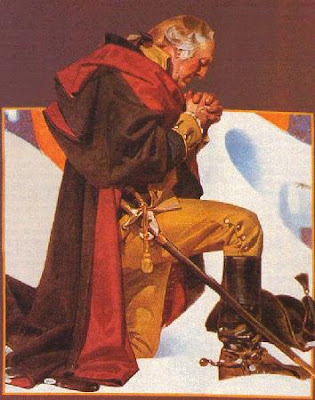 George Washington is known to all Americans as "first in war, first in peace, and first in the hearts of his countrymen," gave us much sound advice on how to keep our independence and freedom. The following comes from the eagleforum.org website:

When George Washington took the oath as first President of the United States on April 30, 1789, he added this four-word prayer of his own: "So help me God."
These words are still used in official oaths by Americans talking public office, in courts of justice, and in other legal proceedings. Washington's words show that he was a man who believed in asking God's help in every part of our private and public lives.
During the terrible times of the Revolutionary War, Washington repeatedly counseled his troops to put their faith and trust in God. Here is one of his messages:

"The time is now near at hand which must probably determine, whether Americans are to be, freeman or slaves; whether they are to have any property they can call their own .... The fate of unborn millions will now depend, under God, on the courage and conduct of this army .... Let us therefore rely on the goodness
of the cause and the aid of the Supreme Being, in whose hands victory is, to animate and encourage us to great and noble actions."

In his first Inaugural Address as President of the United States, Washington reverently acknowledged our country's dependence on Almighty God:

"It would be peculiarly improper to omit in this first official act, my fervent supplications to that Almighty Being who rules over the universe - who presides in the council of nations - and whose providential aids can supply every human defect, that his benediction may consecrate to the liberties and happiness of the people of the United States, a government instituted by themselves for these essential purposes."

After serving as our President during probably the most important two terms in our history, Washington advised us again that religion and morality are necessary for good government. In his Farewell Address on September 19, 1796, he clearly said: "Of all the dispositions and habits which lead to political prosperity, religion and morality are indispensable supports."
Posted by Padre Steve at 5:17 AM