Saint of the Day: Martin of Tours 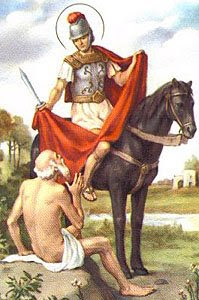 Today we remember the great saint Martin of Tours. St. Martin was born in what is now Hungary in 316 son of an officer in the Roman army. He soon felt called to the life of Christ and served a term of imprisonment as a conscientious objector who felt that military service and Christianity were incompatible.

After his release there occurred the famous incident, which took place near Amiens, when he gave half his cloak to a beggar in whom he saw Christ and then dreamed a dream in which Christ appeared wearing it. He became a disciple of St Hilary at Poitiers and was baptised.

From 360 onwards, Martin devoted himself to the monastic life; and, he is regarded as the virtual founder of Western monasticism. His houses were firstly at Ligugé near Poitiers and after 372, when he was chosen Bishop of Tours by popular acclaim at Marmoutier, which became a thriving monastery. In an age when Christianity was largely confined to towns, Martin saw monasteries as a way of promoting rural evangelisation based on spiritual centres.

He himself was a most assiduous Bishop, carrying out frequent visitations and defending doctrine. Martin's followers panicked when he told them he knew he was near death, but the saint entrusted himself to the Lord's will in the words: "Lord if your people still need me I do not refuse the work; let your will be done". He died on November 8th., 397. Today is the anniversary of his burial at Tours. His great popularity as a saint was promoted largely by the biography of him, written by his friend Sulpicius Severus.
Posted by Padre Steve at 5:26 AM