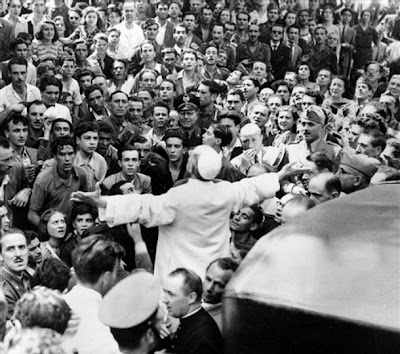 It is good for us to recall the holiness of Pope Pius XII. It is already 50 years since the death of this wonderful Holy Father.

On July 19, 1943, Rome was bombed again, more heavily, by 521 Allied planes, with three targets, causing hundreds of civilian casualties. After the raid, Pius XII, along with Msgr. Montini (future Pope Paul VI), travelled to the Basilica di San Lorenzo fuori le Mura, which had been badly damaged, and distributed ₤ 2 million to the crowds.

An exhibition was inaugurated at the Vatican that retraces, through writings, photographs, personal objects and works of art, the life of Eugenio Pacelli.
"Pius XII died on October 9, 1958, therefore we recall the 50th anniversary of his death and given that he is one of the greatest pontiffs of the last centuries it is important to point that out and to make him better known."

This is the inspiration for the exhibition that was inaugurated near the Braccio di Carlo Magno in the Vatican; it retraces through writings – some of which are unpublished – photographs, personal objects and works of art, the life of Eugenio Pacelli, a pontiff to be discovered anew:

"Historiography insists greatly on the political and diplomatic Pope, on his role during the war; but what is forgotten is that before all this, Eugenio Pacelli had chosen to become a priest, a minister."

Another aspect that must be underlined:

"There is a special link between Pope Pacelli and Rome. He strongly sensed this Roman quality also in the Church. It is an important key to his actions during the war and after it."
Posted by Padre Steve at 5:56 AM