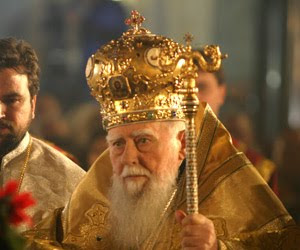 Pope Benedict has sure gotten the ball rolling and it seems others want to get into the ecumenical action! Thanks to A Catholic Knight on this one:
A Bulgarian Orthodox prelate told Benedict XVI of his desire for unity, and his commitment to accelerate communion with the Catholic Church.

At the end of Wednesday's general audience, Bishop Tichon, head of the diocese for Central and Western Europe of the Patriarchate of Bulgaria, stated to the Pope, "We must find unity as soon as possible and finally celebrate together," L'Osservatore Romano reported.

"People don't understand our divisions and our discussions," the bishop stated. He affirmed that he will "not spare any efforts" to work for the quick restoration of "communion between Catholics and Orthodox."

Bishop Tichon said that "the theological dialogue that is going forward in these days in Cyprus is certainly important, but we should not be afraid to say that we must find as soon as possible the way to celebrate together."

"A Catholic will not become an Orthodox and vice versa, but we must approach the altar together," he added.

The prelate told the Pontiff that "this aspiration is a feeling that arose from the works of the assembly" of his diocese, held in Rome, in which all the priests and two delegates from every Bulgarian Orthodox parish took part.

"We have come to the Pope to express our desire for unity and also because he is the Bishop of Rome, the city that hosted our assembly," he stated.

After the bishop, Luka Bebic, speaker of the Croatian Parliament, addressed the Holy Father, inviting the Pontiff to visit his homeland and thanking him "for the support the Holy See has given our people since independence, during the war back then and now in the process that will lead Croatia to enter the European Union."

Benedict XVI next greeted members of the Association Rondine Cittadella della Pace [Citadel of Peace], which promotes dialogue and peace by bringing together students from conflict areas to live and study in community.

They shared with the Pope a concrete proposal titled "14 Points for Peace in the Caucasus" that was developed at an international congress the association organized in May.

The proposal was also distributed to the ambassadors of the Caucasus countries and to the Organization for Security and Co-operation in Europe. Young people of all the ethnic and religious groups of the Caucasus were also present at the audience.

Members of the Congregation of the Sisters of Charity of Cardinal Sancha, whose founder, Cardinal Ciriaco María Sancha y Hervas, was beatified Sunday in Toledo, Spain, also greeted the Pontiff. Headed by their superior, Sister Maria del Carmen Dominguez, the religious expressed to the Holy Father their commitment to be faithful to their original charism "of service to the poor, orphans and the elderly."
Via Catholic.net
Posted by Padre Steve at 7:32 AM

That would be so good for All.
Let us pray for this!!

Praise God! This is a step towards the Unity Christ desires.