The Church of Don Bosco is now a Minor Basilica 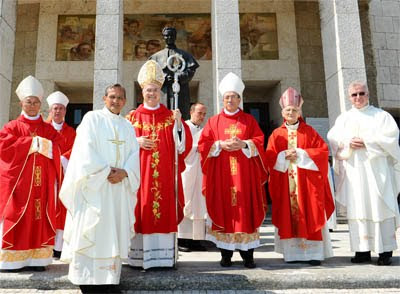 On Pentecost Sunday the Salesian Bishops made a short pilgrimage to Colle Don Bosco. Here among other things in a beautiful but busy day full of the Salesian spirit, they had a meeting with Cardinal Tarcisio Bertone, the Vatican Secretary of State.

In the Upper Church at Colle Don Bosco over a thousand people welcomed the Cardinal Bertone. Accompanying him were other Salesian Cardinals, Archbishops, Bishops, the Rector Major Fr Pascual Chávez and the members of his Council. Among those present were the Mayors and representatives of the neighbouring local authorities. The Cardinal entered the church carrying the pastoral staff of Cardinal John Cagliero, the first Salesian Bishop and Cardinal whose 125 anniversary of episcopal consecration is being celebrated.

Before Mass began Cardinal Bertone read a Decree from the Congregation for Divine Worship and the Discipline of the Sacraments by which the Church of Don Bosco at the Colle has been raised to the dignity of a Minor Basilica. The virtues and apostolic zeal of Don Bosco, who was born and lived his first years at the Becchi, are the reason for this privilege granted to this large church which is the goal of many pilgrimages especially by young people.

The Rector Major had requested this privilege for the Church of Don Bosco for 2015, the year in which the bicentenary of the birth of Don Bosco will be celebrated.

Among themes touched on in his homily by Cardinal Bertone were the fact that Pentecost is not only an event in the past, since the Holy Spirit is like a breath of wind which communicates “the power of a word of fire which proclaims the mystery of Jesus crucified and risen in many languages. It is a message of the God Who is Love, which all can understand and is addressed to the whole world.” It is an event which “was the beginning of a work of evangelisation without limits aimed at ‘every nation under the heavens.’”

“I turn to you my dear Salesian Confreres Bishops and Cardinals! Why has the Lord Jesus called us today to this hill?” The Secretary of State invited the Bishops, his confreres, to re-enforce their initial vocation and with the strength of the Holy Spirit to give new force to their desire to be those who proclaim the Gospel especially to the young as Don Bosco did. “Following in the footsteps of his shining example, taken up by so many holy bishops, priests and lay people, let us too open ourselves to the breath of the Holy Spirit, making a gift to the Church of our personal holiness before that of our service and ministry. When, with pride we sing ‘Don Bosco ritorna…’ that holy priest, that spiritual father of the young, that zealous apostle, that example of total fidelity to the Church and to the Pope has to be us.”

The service to which he has been called at the side of Benedict XVI, has led him “to share concern for all the children of the Church, both those who fill her with glory though their holiness and also those who crucify her through their sins.” Again, speaking about the Pope he said: “he governs with strength, but his fatherliness towards all is full of sweetness and love. Benedict XVI is tireless in pointing out the beauty of the Christian faith.” The recent pilgrimage to Fatima bore witness to the force with which he reminded the Church of the need for conversion, for prayer and for penance. “The difficulties of the Church, persecuted and opposed in so many places; the light and shades of a Church holy and sinful in her children; the anxieties of a Church in need of help because she is made up of men and women who are facing up to the dangers and the challenges of the society in which they are living, require an ardent pastoral charity and examples of holiness.”

At the end of the Mass the Rector Major of the Salesians, Fr Pascual Chávez, read and handed to the Vatican Secretary of State a letter to the Pope in which are expressed “the affection, the closeness and the total availability which Don Bosco has taught us to live from the very beginning of his charismatic experience, with regard to the Holy Father and to the whole Church.”

Afterwards in the theatre of the ”Bernardi Semeria” Institute, there was a short meeting between the Salesian Bishops and Cardinal Bertone. “As a Salesian, I carry with me a special love for the young and all the experience and thoughts accumulated in the years of teaching at the Salesian Pontifical University a veritable human and cultural training ground.” 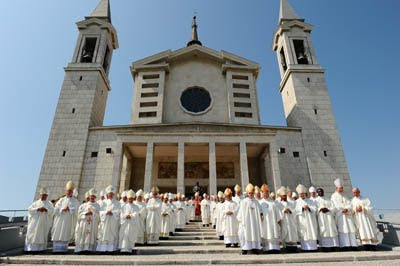