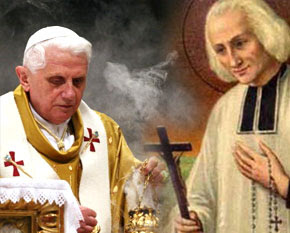 In his last catechesis on the priesthood, Pope Benedict dedicated his Wednesday audience address to the authority that priests receive from Jesus, emphasizing that it must be used in service of people, not as an end in itself. He also asked for prayers to conclude the Year for Priests for all the ordained, including himself.

In the company of 25,000 ticket-holding attendees and hundreds more people who showed up besides, Benedict XVI dedicated his last catechesis on the essential tasks of priests to the necessity of priests working in service of the "true, ultimate good" of the person through his exercise of the priestly authority given him by Christ.

Pope Benedict explained to the crowd of pilgrims that today he wanted to look at what priestly authority means in the contemporary context, focusing specifically on how it comes from “the Lord's command to feed His sheep."

"The regimes which spread death and terror last century are a powerful reminder that authority, in all fields, when exercised without reference to the transcendent, when it ignores the supreme authority that is God Himself, inevitably ends up by turning against man,” the Holy Father said.

“It is important, then, to recognize that human authority is never an end but always and only a means, and that, necessarily and at all times, the end is always the person."

This authority, said the Holy Father, is "a precious help" towards the full realization of Christ and salvation.

Pope Benedict also touched on the Church's hierarchy, noting that the public often thinks it is of "an element of subordination, ... and for many people this contrasts with the flexibility and vitality of pastoral service.”

But this is “an erroneous interpretation which has its origins in the abuses of history," he explained. "The true meaning is of a sacred origin, it is an authority that comes from another, and subjects the person to the mystery of Christ, making him His servant. Only as His servant can he govern and guide, for Christ and with Christ."

"Exercised in the Lord's name, it is an expression of the constant presence and care of the Good Shepherd."

He went on to say that it is through the ministry of the priest that the Lord loves humankind, reaching souls through them in order to instruct, safeguard and guide them. This ministry, he taught, in addition to its foundation on the sacrament of Holy Orders, requires "above all, the continuous and progressive willingness to let Christ himself govern the priestly existence."

"In fact," the Pope added no one is really capable of nourishing the flock of Christ, if he doesn't live a profound and real obedience to Christ and the Church … "

This authority, then, through faith "remains a service to the building up of the church in holiness unity and truth." And, said Pope Benedict, the only place a priest can find the strength to carry out such a total devotion to the flock is Christ.

Pope Benedict XVI called for priests to be fearless in guiding every individual to Christ, through obedience to Christ's will, with the "solid certainty that the proclamation of the Gospel is the greatest service that one can do for man."

He concluded by inviting everyone to pray for priests, bishops and also for him as the Successor of St. Peter, who has "a specific duty in governing the Church of Christ."

"Pray that we might know how to take care of all of the sheep in the flock entrusted to us, also those who are lost."

The Holy Father also renewed his invitation to all priests of the world to attend the concluding celebrations for the Year for Priests, set to take place in Rome from June 9-11. During the convention, he said, they will meditate on aspects of their ministry and renew their priestly vows.
Posted by Padre Steve at 7:15 PM