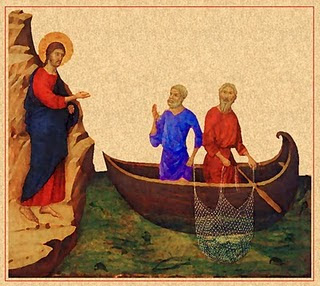 Fr. Pascual Chavez speaks to us about the call of the Lord in his monthly Salesian Bulletin message for the Salesian Family. The following comes fromt he SDB.org site:

If He calls you, you will never find rest (Charles Péguy).

“Jesus went up into the hills and summoned those he wanted; so they came to him and he appointed twelve whom he called apostles; they were to be his companions and to be sent out to preach, with power to cast out devils” (Mk 3,13-15). What the evangelist Mark says is found in all the four gospels as one of the first things Jesus did at the beginning of his public life. This shows that the “Good News” is inseparable from a community in which, come in a two-fold manner the disciples live with Jesus and share in his mission. At the basis of discipleship and the following of Christ we always find a personal meeting with Him which transforms life. In some cases, Jesus calls them while they are working: “As he was walking along by the Sea of Galilee he saw Simon and his brother Andrew casting a net in the lake – for they were fishermen. And Jesus said to them: Follow me and I will make you into fishers of men” (Mk 1,16-18). They follow him at once. The same happens with James and John (ibid vv 19-20). Matthew on the other hand receives the call while he is sitting by the customs house (Mt 9,9). In this choosing of the disciples we find a “criterion” in God’s action: his thoughts are not our thoughts (cf Is 55,8). This is something constant also in the OT, e.g. in the choice of David and of Israel: “Man looks on the outward appearance, but the Lord looks on the heart” (1 Sam 16,7). It was the same with Abraham, old and childless, with Moses old and stammering, with Jeremiah young and inexperienced … with Mary.

The gospel texts underlines the diversity of the types chosen. There are some fishermen, beginning with Cephas – as Jesus renames Peter – his brother Andrew, and the sons of Zebedee. But there is also a publican, Matthew-Levi, with some belonging to the group of his bitter enemies such as Simon “the Zealot” (Lk 6,5), and Nathanael who looked down on Galileeans (Jn 1,45s). It would be difficult to find a more disparate group. To the twelve one could apply the expression of Paul to the Corinthians: “Take yourselves brothers at the time you were called: how many of you were wise in the ordinary sense of the word, how many were influential people, or came from noble families?” (1 Cor 1,26). In the case of Simon Peter, Luke underlines the ‘poverty’ of the one who will become the head of the apostolic group, showing how he fails even at his job as a fisherman (cf. Lk 5,4-10). Recalling the phrase of Mark, discipleship implies essentially living with Jesus, a growing familiarity and friendship with him and taking part in his mission: proclaiming the Kingdom of God, accompanied by the “signs” which show its authenticity.

What is implied by this discipleship with regard to the question often asked about Jesus: “Who is this man?” Traditionally the following of Christ was considered in moral and spiritual terms. Nowadays, on the other hand it has recovered all its biblical and theological weight. At first sight it would seem that Jesus was acting like one of the many rabbi. But there are very great differences. No one for example could ask to be included among his disciples: “You did not choose me, no I chose you” (Jn 15,16). In addition, following Jesus means leaving everything: possessions, occupation, family... Only God can make demands that go beyond the most sacred human ties: “Anyone who prefers father or mother to me is not worthy of me; anyone who prefers son or daughter to me is not worthy of me” (Mt 10,37-38). It is possible to make a comparison with the event which as the Salesian Family we have just finished celebrating: the 150the anniversary of the founding of the Congregation. Don Bosco called together a handful of his young co-workers so that “they would stay with him” and would share the mission which God had entrusted to him: the salvation of poor and abandoned youth. To that small band could be applied the same words of St Paul to the Corinthians: humanly speaking there were no future prospects, just to think that the Spiritual Director of the Pious Society was a young man of 22 years of age, Michael Rua! “They were all very young and it was a question of putting one’s whole life on the line, with one throw of the dice: trusting in Don Bosco”. Some were quite shocked. Fr Lemoyne writes: “More than one whispered, ‘Don Bosco wants to make monks of us all!” (AGC 404,10). The reply of the young Cagliero “Monk or nor I’m staying with Don Bosco!”, recalls that of Peter to Jesus: “Lord who shall we go to? You have the message of eternal life” (Jn 6,68). And it is to Jesus that Cagliero intends to give his whole life, just like all the others; and Don Bosco for them is the practical and irreplaceable voice of the will of God and of the mission He wants to entrust to them.
Posted by Padre Steve at 9:31 AM