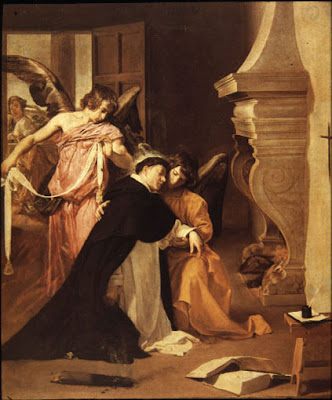 Basing his catechesis for a third and final time on the legacy of St. Thomas Aquinas, Pope Benedict highlighted Aquinas’ “masterpiece,” the “Summa Theologica.” He referred to the saint's devotion to the Eucharist, making the call for all people to "fall in love" with the Blessed Sacrament.

An estimated 7,000 pilgrims and faithful joined the Pope in the Paul VI Hall for Wednesday's general audience. Among those in attendance was a group from Malawi in tribal dress who performed a traditional dance for the Holy Father from their seats in the packed auditorium.

Referring to the "masterpiece" of the “Summa Theologica,” Benedict XVI noted the saint’s “serene confidence in the harmony of faith and reason, and in the ability of reason, enlightened by faith, to come to an understanding of God and his saving plan.”

Through the work, said the Pope, the saint “illustrates the working of divine grace, which perfects our natural gifts and enables us, through the practice of the virtues and the gifts of the Holy Spirit, to attain the eternal happiness for which we were created.”

In the collection of articles from which the “Summa” is composed, explained the Holy Father, the 13th century saint offers an extensive series of questions and answers through which he assists in deepening the teachings provided in Scripture and those from the Fathers of the Church, especially St. Augustine. He examines three elements of the being and essence of God: that He exists in Himself as the beginning and end of all things, that He is present in life through His Grace and in Christian activity, and that he is present in a special way in the Person of Christ, still present in the sacraments.

Benedict XVI recalled the importance the saint gives to the sacraments, in particular to the Eucharist. Noting Aquinas' enormous devotion to the Eucharist, the Holy Father cited the saint's words from another work in which he spoke of the Blessed Sacrament as that of the "Passion of our Lord, (which) contains in it Jesus Christ who suffered for us.”

Through these words, said the Pope, we "understand well why St. Thomas and other saints celebrated Mass while shedding tears of compassion, tears of joy and of gratitude, for the Lord, who offers himself in sacrifice for us."

The Holy Father then exclaimed, "in the example of the saints, let us all fall in love with this Sacrament!

"Let us participate devotedly in Mass in order to obtain its spiritual fruits; let us feed from the Body and Blood of the Lord that we may be incessantly nourished by divine Grace; let us pause willingly and often in the company of the Blessed Sacrament."

Pope Benedict XVI concluded the English-language portion of the catechesis by imploring that, “with the Angelic Doctor, let us pray for the grace to love the Lord with all our heart and to love our neighbor, 'in God and for God.'”