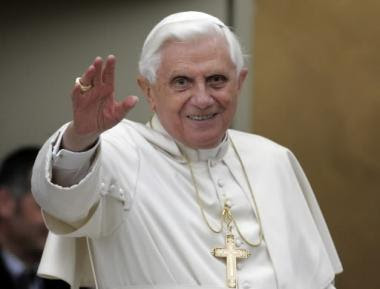 The following comes from the CNA:
Vatican analyst Sandro Magister published an article in which he detailed Pope Benedict’s teaching on priestly celibacy, a concept with which many have expressed discontent in face of the clerical sexual abuse scandals. However, the Pope’s June 10 explanation, which presents celibacy in a new light, was both hinted at and foreshadowed by two prior talks, Magister claims.

During a prayer vigil with 15,000 priests from around the world, Pope Benedict answered the questions of five priests from five different continents. His response to one priest in particular was the focus of Magister's column. Responding to a question by a priest from Eastern Europe, Pope Benedict explained the meaning of priestly celibacy. “And he did so in an original way, departing from the current historical, theological, and spiritual literature,” wrote Magister.

“It is clear from this that one of the cornerstones of this pontificate is not a distancing from clerical celibacy, but its reinforcement,” he added. Quoting from the Pope’s open letter to world bishops from March of 2009, Magister noted that one of Pope Benedict’s priorities is “to make God present in the world and to show men and women the way to God.”

Magister also recalled a speech addressed to the Roman curia on December 22, 2006, in which Pope Benedict said, “The great theme of my journey to Germany was God.” And while the Church “must speak of many things,” her true theme is God, and from the ordering of all things toward God comes the importance of all other church teachings. “Moreover, the great problem of the West is forgetfulness of God,” said the Pope. “This forgetfulness is spreading.”

In that address, Pope Benedict declared that “the true foundation of the priest's life, the ground of his existence, the ground of his life, is God himself.” Making reference to the sixteenth psalm, which was once a part of the rite of ordination, he also explained how the priest’s property or possession is not of this world. As David said, “The Lord is my chosen portion and my cup, you hold my lot,” so does the priest acknowledge that he, like the tribe of Levi, does not live off the land, but rather off the Lord.

Thus, “The priest must truly know God from within and thus bring him to men and women: this is the prime service that contemporary humanity needs.” When God is no longer central to a priest’s life, he loses his zeal, explained the Pope. Chastity, he continued, “can only be theocentric. It cannot mean being deprived of love, but must mean letting oneself be consumed by passion for God and subsequently, thanks to a more intimate way of being with him, to serve men and women, too.”

This speech, declared Magister, is a reminder of the Pope Benedict’s dedication to the clergy. And it is because of this understanding of the role of the priest that the Pope declared the Year for Priests and to propose “exemplary figures like the Holy Curé of Ars.”

The Pope’s remarks last Thursday only confirm this dedication and this understanding of celibacy, Magister wrote. And they reinforce “an extremely coherent picture” of the role of the Church, which is “to lead men to God.”

As he spoke to his brother priests in St. Peter’s Square last week, the Holy Father explained that “celibacy is an anticipation.” To live the celibate life is to acknowledge the presence of God, the certainty of the next life, and the value of both.

In a world where the “now” of the present and tangible seems good enough, “celibacy is a great scandal, because it shows precisely that God is considered and lived as a reality,” Pope Benedict told the gathered priests. “With the eschatological life of celibacy, the future world of God enters into the realities of our time,” even though the material world would have any hint of the transcendent vanish.

The Pope contrasted celibacy with the modern notion of not getting married. The two are not at all alike, he said, and that is because celibacy represents a lifestyle of commitment, as does marriage. “Not getting married is based on the desire to live only for oneself, not to accept any definitive bond, to have life at every moment in full autonomy, to decide at every moment what to do, what to take from life; and therefore a ‘no’ to commitment, a ‘no’ to definitiveness, a having life only for oneself,” he explained.

Celibacy, on the other hand, “is a definitive ‘yes,’ it is allowing ourselves to be taken in hand by God, giving ourselves into the hands of the Lord, into his ‘I,’ and therefore it is an act of fidelity and trust,” said the Holy Father. “It is the exact opposite of this ‘no,’ of this autonomy that does not want to be obligated, that does not want to enter into a bond.”

And, “as the criticisms show,” concluded Benedict XVI, “celibacy is a great sign of faith, of the presence of God in the world.” He prayed that the Lord free priests from the secondary scandals such as their sins and imperfections so that they may continue to live the “scandal” of celibacy. Thus, by demonstrating their faith and trust in God, they may bring people to God.