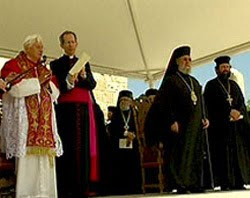 Speaking at an ecumenical celebration in Cyprus, the Holy Father explained that like the original evangelizers of the island, every Christian is called to witness to the Lord and his Gospel.

Members of the Orthodox Church, led by His Beatitude Chrysostomos II, and many Catholic Church representatives including Cardinal Walter Kasper, the president of the Pontifical Council for Promoting Christian Unity, were present for the celebration at the Church of Agia Kiriaki Chrysopolitissa for the ecumenical encounter on Friday afternoon. Other representations included those from the Armenian, Lutheran and Anglican communities.

Recalling the original evangelizers of Cyprus in Sts. Barnabas, Mark and Paul to the island, Pope Benedict said “from this place, the Gospel message began to spread throughout the Empire, and the Church, grounded in the apostolic preaching, was able to take root throughout the then-known world.”

He observed that the Church in the nation can “rightly be proud” of its connection to these preachers and its links with all churches through the communion in the apostolic faith. “This is the communion,” he explained, “real yet imperfect, which already unites us, and which impels us to overcome our divisions and to strive for the restoration of that full visible unity which is the Lord’s will for all his followers.”

Our communion in the faith, he went on, “is both a gift and a summons to mission” and “like Paul and Barnabas, every Christian, by baptism, is set apart to bear prophetic witness to the Risen Lord and to his Gospel of reconciliation, mercy and peace.”

Benedict XVI also cited the role and commitment of the Catholic and Orthodox Churches of Cyprus, as the "bridge between East and West," to the advancement of dialogue and fraternal cooperation, praying that “the Holy Spirit enlighten our minds and strengthen our resolve, so that together we can bring the message of salvation to the men and women of our time…”

At the conclusion of the celebration, the Holy Father blessed a plaque for a new retirement home built by the Latin Rite Catholic community of Paphos and moved on to the capital city of Nicosia where he is scheduled to consign the Instrumentum laboris tomorrow.
Posted by Padre Steve at 12:11 PM