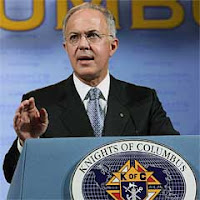 New York Times bestselling author Carl Anderson is arguing in his latest book that the idea of Americans being divided on moral issues is a myth. In fact, all that is required to move the country forward is courage.

“We have a moral consensus on the economy, on the need for ethics in government—and even on issues that seem intractable, like abortion, where 8 in 10 Americans can agree on certain restrictions,” Anderson says.

“What we need now,” he urges, “is for people in key institutions to act with courage on these transcendent values.”

Carl A. Anderson, the head of the Knights of Columbus, makes his case in “Beyond A House Divided: The Moral Consensus Ignored By Washington, Wall Street and the Media,” which was released on the same day as the midterm election took place, making its message all the more timely.

The book presents hard numbers that debunk the myth of a polarized people and show that what division does exist is actually between certain American institutions and the American people, whose values these institutions often don't share.

Anderson shows that the Americans have an opportunity to begin a conversation “where the vast majority of the American people stand” and seek “the common ground already found in the common sense of consensus of the electorate.”

Data from recent polling by the Marist College Institute for Public Opinion and others has revealed that 49% of Americans believe that a “return to traditional moral values” is the greatest hope for the future of this nation.

When asking what was most valuable in achieving personal economic success, over 75% of Americans said either individual effort, honesty and integrity, or education was most valuable, highlighting the importance of a personal moral based work ethic. Less than 25% believe in relying on others to achieve their success, whether it is who you know, family support, luck or even government assistance.

"Time and again, polling has revealed that the moral compass of the American people is sound and continues to point an ethical way forward for our country," Anderson says.

With this new perspective on the future of the United States, the head of the Knights of Columbus argues that the country should not be guided by “a partisan political approach” but should discuss the nation's future based “on the moral sense—and consensus—of the American People.”

More information on Carl Anderson's new book can be found at www.beyondahousedivided.com.