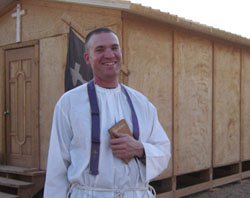 Confronting one's own mortality on a daily basis can be overwhelming, but deployed servicemen take comfort and strength from prayers offered on the home front, according to Army chaplain Father Brian Kane.

Fr. Brian Kane, a priest of the Diocese of Lincoln, Nebraska, is presently deployed for the second time in Iraq. He is Chaplain for the 67th Battlefield Surveillance Brigade and oversees four battalion unit ministry teams which serve over 1,400 soldiers across the country.

“It is humbling for me to serve such a dedicated group of men and women every day,” he told CNA in a Thursday e-mail interview. “To put on the uniform, to stand and salute when the National Anthem is being played, to fold the flag after it has been draped on the casket of a fallen soldier, these are all privileges of those who serve.”

Deployed troops share the same spiritual needs as those at home, but the unique characteristics of life in a combat zone add other stresses.

“Soldiers are faced with their own mortality each day,” he commented. Even though many are not in imminent danger, bases still receive indirect fire in rocket attacks and convoys are attacked with IEDs.

Circumstances often force soldiers to consider “where they stand in their faith and what their relationship with God looks like,” Fr. Kane said. At the same time, they are away from spouses and other family members who encourage them in religious practice. Both a shortage of priests and busy work schedules keep Catholic soldiers from Mass.

The chaplain recalled his first deployment in Iraq during the U.S. offensive, when it was “very difficult” for him to minister to service members who were wounded or killed.

“To be able to stand at the bedside of a young man who is close to his last breath and console him with the sacrament of the sick, or to lean over and hear the confession of a soldier who has lost an arm or leg is a pertinent reminder to me of why we have priests deployed in a combat zone.”

Fr. Kane also recounted his helicopter landing at a small base one Christmas Eve. He was met by two young Marines who wanted to go to Confession before Christmas Mass, but were afraid the long line already formed at the chapel would prevent them.

“I was able to hear their confessions as we walked to the chapel,” he reported, adding that he also heard all the confessions of those standing in line.

In addition to Catholic Bible studies and RCIA classes, Catholic chaplains try to help soldiers grow in their faith throughout their deployment by providing Mass and Confession when a priest is available.

Asked how those at home can support deployed service members, Fr. Kane replied:

“Our greatest help comes from the prayers of everyone at home. Knowing we are surrounded by a mantle of prayer encourages us to keep going in the face of difficulty. Prayer is very powerful.

“I have seen firsthand how a soldier's prayers as well as the prayers of others have saved them from injury or even death. When we hear from home that prayers are being offered for us it is a comfort and strength.

“Each person here knows that today could be their last,” the chaplain continued. “They know they did not have to volunteer to serve, yet they do. Our country should be proud of the men and women who make up the armed forces.”

He noted that the military is a 100 percent volunteer organization and many soldiers have deployed, despite being able to retire after 20 years of service.

“Instead they choose to go into harm’s way to serve the country they love, many deploying two and three times.”

Prayer, care packages and letters from groups at home, and e-mail and phone calls from families “remind us that we have not been forgotten,” he continued. This support “helps make each day here more worthwhile.”

Fr. Kane said his return from his first deployment was also memorable because of the support civilians showed for returning military.

“I don't think there was a dry eye on my bus when we watched people line the streets, wave flags and greet us as we got off the bus. Police cars, fire trucks and motorcycles escorted us to the place where all our families were waiting for us.

“I am stopped all the time when wearing my uniform in public by people who want to shake my hand or stop to say ‘thank you for your service’,” the priest said. “Soldiers may not know what else to say other than thanks, but those encounters are memorable and mean a lot.”
Posted by Padre Steve at 8:57 AM