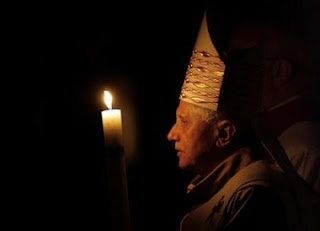 Pope Benedict XVI heralded the beginning of Advent this year with an unprecedented worldwide pro-life vigil. On Saturday night at St. Peter's Basilica in Rome, he urged respect for human life and warned against adult “selfishness” and the “darkening of consciences” in modern society.

On Nov. 27, St. Peter's was the center of global focus, as dioceses around the world joined the Pope's invitation to prepare for the season of Christmas by joining in a special Vespers service for the unborn.

Although it is common for the Pope to encourage prayer for particular intentions, the request for a coordinated worldwide vigil – to be held on the same date and approximately the same time, in all dioceses – is highly exceptional.

Pope Benedict began his homily saying that God became a child to experience the life of man in order to “to save it completely, fully.”

“The beginning of the liturgical year helps us to relive the expectation of God made flesh in the womb of the Virgin Mary,” he said, adding that the “Incarnation reveals to us, with intense light and in an amazing way, that every human life has an incomparable, a most elevated dignity.”

Because “God loves us so deeply, totally, without distinction,” the Pope noted that belief in “Jesus Christ also means having a new outlook on man, a look of trust and hope.”

Humankind, therefore, “has the right not to be treated as an object of possession or something to manipulate at will, not to be reduced to a mere instrument for the benefit of others and their interests,” he said.

“In this vein we find the Church's concern for the unborn, the most fragile, the most threatened by the selfishness of adults and the darkening of consciences,” the Pontiff added.

He then reiterated the Church's stance against abortion, warning against “cultural tendencies that seek to anesthetize consciences with misleading motivations.”

“With regard to the embryo in the womb, science itself highlights its autonomy capable of interaction with the mother, the coordination of biological processes, the continuity of development, the growing complexity of the organism,” he said. “This is not an accumulation of biological material, but a new living being, dynamic and wonderfully ordered, a new unique human being.”

“So was Jesus in Mary's womb, so it was for all of us in our mother’s womb.”

Pope Benedict went on to say that even after birth, children around the world face abandonment, hunger, poverty, disease, abuse, violence or exploitation.

“I urge the protagonists of politics, economic and social communications to do everything in their power to promote a culture which respects human life, to provide favorable conditions and support networks for the reception and development of life,” he said.

The Pope concluded by entrusting prayers for the unborn to the Virgin Mary, “who welcomed the Son of God made man with faith, with her maternal womb, with loving care, with nurturing support and vibrant with love.”
Posted by Padre Steve at 3:26 PM