No one excluded from Jesus' mercy, teaches Benedict XVI 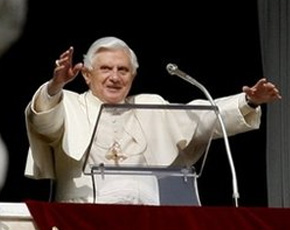 God "sees a soul to save" in everyone, the Pope said before praying the Angelus on Sunday. The Lord's mercy, he taught, takes nothing away from the gravity of sins, but always seeks to save the sinner.

Pilgrims enjoyed a break from a morning of rain in Rome as they joined the Pope for the Angelus.

Referring to the Gospel reading from Luke that recounts the story of the chief tax collector Zacchaeus, he reflected on his conversion after contact with Jesus.

Jesus' encounter with Zacchaeus is one of several episodes where St. Luke talks about the merciful love of God and of Christ, said the Pope. In this case, Jesus directs his attention to Zacchaeus, considered a "public sinner" for his position.

The Lord "knew very well what he was doing" when he asked the publicly disliked man to host him in his home, and his "gamble" was rewarded with the man's conversion, Benedict XVI pointed out.

Citing Jesus' words from the Gospel, the Pope said, "today, salvation has come to this house" and "the Son of man has come to seek and to save what had been lost."

"God," the Holy Father said, "does not exclude anyone, rich or poor." Neither is He "conditioned by our human prejudices, but He sees in everyone as a soul to save and is attracted especially by those who are judged lost and who consider themselves to be such."

Jesus, he explained, demonstrates this immense mercy, "not taking anything away from the gravity of the sin, but looking always to save sinners, to offer them the possibility of rescue, starting over from the beginning, repenting."

Focusing on Zaccheus, Pope Benedict noted that he "accepted Jesus and was converted because Jesus accepted him first! He did not condemn him, but met his desire for salvation."

The Holy Father concluded his catechesis before the Angelus by praying for the intercession of Mary so that all people "might experience the joy of being visited by the Son of God, of being renewed by his love, and transmitting his mercy to others."

Following the noon-time prayer, he greeted the variety of pilgrims in their different languages. He made a special mention of Blessed Szilard Bogdanffy, a Romanian bishop who was martyred under communist rule in the country in 1953.

Jailed less than two months after his consecration as a bishop, he is remembered for his ability to continue loving despite torture and trial.

Thanking God for this "heroic Pastor of the Church," the Pope prayed that his testimony would be a comfort to all of those persecuted for the faith today.
Posted by Padre Steve at 8:49 AM