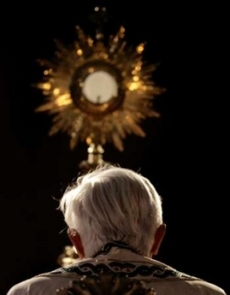 The following comes from the Zenit.org site:

Benedict XVI is emphasizing the jubilee character of the 2012 Eucharistic Congress in Dublin, which will mark a number of 50th anniversaries.

The Pope made this reflection when he addressed today participants in the plenary assembly of the Pontifical Committee for International Eucharistic Congresses, which has completed preparations for the upcoming conference.

Dublin, Ireland, will host the 2012 event. The theme is "The Eucharist: Communion with Christ and with one another."

The Holy Father spoke of the "happy circumstances" that add to the significance of this Eucharistic congress.

He explained: "The present assembly falls [...] on the 50th anniversary of the Eucharistic Congress of Munich, which marked a turning point in the understanding of the ecclesial events elaborating the idea of 'statio orbis.'"

The concept of "statio orbis" is related to Eucharistic celebrations with masses of people.

The Pontiff continued: "I had the joy of participating personally in that meeting, as well as to witness the growth of that concept, as a young professor of theology.

"Moreover, the 2012 Dublin Congress will have a jubilee character, in fact it will be the 50th congress, and it will be held likewise 50 years from the opening of Vatican II, to which the theme makes explicit reference, recalling Chapter 7 of the dogmatic constitution 'Lumen Gentium.'"

Benedict XVI went on to reflect on the "long history in the Church" of Eucharistic congresses.

"Through the characteristic form of 'statio orbis,' they highlight the universal dimension of the celebration: In fact, it is always a celebration of faith around the Eucharistic Christ, the Christ of the supreme sacrifice for humanity."

The Church in a Eucharistic congress is one that "recollects itself around its Lord and God," he said.

The Pope also reminded the assembly: "Enclosed in the Eucharist is the treasure of the Church, namely, Christ himself, who on the cross immolated himself for the salvation of humanity."

And, he affirmed, "Through communion with the Body of Christ, the Church becomes ever more herself: mystery of 'vertical' and 'horizontal' unity for the whole human race. Opposed to the germs of disintegration, which daily experience shows so rooted in humanity because of sin, is the generating force of unity of the Body of Christ, the Eucharist, continually forming the Church, which also creates communion among men."
Posted by Padre Steve at 8:04 PM