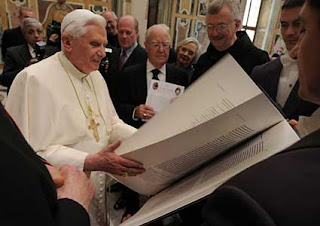 Pope Benedict XVI has issued a lofty and impassioned plea for everyone in the Church to rediscover the Bible and to grow in “an ever greater love of the Word of God.”

“We must never forget that all authentic and living Christian spirituality is based on the Word of God proclaimed, accepted, celebrated and meditated upon in the Church.

The Pope’s new apostolic exhortation, “Verbum Domini” (The Word of the Lord), issued Nov. 11, is a book-length response to a special 2008 Synod for Bishops on the Bible and the life of the Church.

The Pope reaffirms forcefully the Church’s traditional teaching that the Bible is the revealed Word of God written by human authors inspired by the Holy Spirit. He notes that it conveys not just moral and spiritual truths but also truths about “the reality of human history.”

“The history of salvation is not mythology, but a true history,” the Pope said.

He added: “It must be remembered first and foremost that biblical revelation is deeply rooted in history.”

But the Pope declined to wade into the controversial question of how “true” Scripture is when it speaks of historical events.

Some had hoped that the Pope would pronounce on the precise meaning of the Church’s teaching that Scripture is “without error.”

Instead Pope Benedict reaffirmed the traditional teaching but called for further study of the relationship between what scholars call the divine “inspiration” of Scripture and its “inerrancy.”

“A deeper study of the process of inspiration will doubtless lead to a greater understanding of the truth contained in the sacred books,” he said.

“Certainly theological reflection has always considered inspiration and truth as two key concepts for an ecclesial hermeneutic of the sacred Scriptures,” he added.

“Nonetheless, one must acknowledge the need today for a fuller and more adequate study of these realities, in order better to respond to the need to interpret the sacred texts in accordance with their nature.”

The Pope expressed what he called his “fervent hope” that such research would continue and would “bear fruit both for biblical science and for the spiritual life of the faithful.”

The heart of “Verbum Domini” is a long and often technical discussion of “hermeneutics,” or the proper method for interpreting the sacred texts.

The Pope warned of the errors and risks of a “dualistic” and “secularized” approach, which treats the Bible as if it is only a historical or literary document.

The Bible, he said, must be studied through “serious historical research.” But students must then build on those findings to discover the spiritual meaning that God intends to communicate in the Scriptures.

He criticized “fundamentalist” or “literalist” interpretations and urged renewed appreciation for the symbolic and spiritual interpretation techniques used by the ancient Fathers of the Church.

He also urged interpreters to study how the saints read the Bible.

“The most profound interpretation of Scripture comes precisely from those who let themselves be shaped by the Word of God through listening, reading and assiduous meditation,” he said.

Everyone who seeks to interpret the Bible — from the ordinary believer to the pastor or the theologian, must remember — the Pope said: “The Bible is the Church’s book, and its essential place in the Church’s life gives rise to its genuine interpretation.”

He added: “An authentic interpretation of the Bible must always be in harmony with the faith of the Catholic Church.”

Pope Benedict also devoted a long passage on the importance of the Scriptures in the Church’s sacraments and worship.

“The liturgy is the privileged setting in which God speaks to us in the midst of our lives; he speaks today to his people, who hear and respond,” he said. “Every liturgical action is by its very nature steeped in sacred Scripture.”

From the start of his pontificate, Pope Benedict has emphasized that the right understanding of Scripture is necessary for the true understanding of Christ, salvation, and the truths of the Catholic faith.

In his homily upon assuming the chair of the Bishop of Rome in May 2005, the Pope described his mission as being “at the service of, the Word of God.”

“It is incumbent … to ensure that this Word continues to be present in its greatness and to resound in its purity, so that it is not torn to pieces by continuous changes in usage,” he said.

And the Pope has repeatedly emphasized that the Word of God is the key to the Church’s mission in a world that has grown increasingly forgetful of God.

In a letter to the world’s bishops last year, Benedict said: “Leading men and women to God, to the God who speaks in the Bible: this is the supreme and fundamental priority of the Church and of the Successor of Peter at the present time.”

These themes are all present in “Verbum Domini.”

The new document calls for “recovering the centrality of the divine Word in the Christian life.”

“Our own time,” the Pope writes, “must be increasingly marked by a new hearing of God’s Word and a new evangelization.”

In addition, Pope Benedict includes a decidedly personal section in which he proposes to teach people the practice of praying with the Bible, known as “lectio divina,” or sacred reading.

The Pope called for a renewal of prayerful, personal reading of Scripture and for Scripture to be “every more fully at the heart of every ecclesial activity.”

“The Church is built upon the Word of God; she is born from and lives by that Word,” Pope Benedict said.

“Throughout its history, the People of God has always found strength in the word of God, and today too the ecclesial community grows by hearing, celebrating and studying that Word.”
Posted by Padre Steve at 1:20 PM