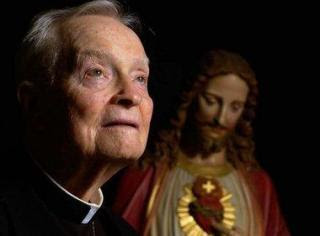 The following comes from the NOLA site:

Philip Matthew Hannan, the archbishop who built an ever-widening network of services for the poor during nearly a quarter-century as the pastor of nearly a half-million New Orleans’ Catholics, died Thursday at 3 a.m. at Chateau de Notre Dame, the Archdiocese of New Orleans said. He was 98.


Archbishop Hannan died on the 46th anniversary of his appointment to New Orleans.


Archbishop Hannan "truly made New Orleans his home. This was his parish and his archdiocese, and it had no boundaries,' Archbishop Gregory Aymond said in a statement.


At his death, Archbishop Hannan was the senior archbishop or bishop in the American hierarchy, and the third oldest, behind retired Archbishop Peter Gerety of Newark, 99, and retired Bishop Joseph McLaughlin of Buffalo, 98.


Archbishop Hannan enjoyed a long and robust public retirement well into his 90s. But though free of major chronic illness, he became more frail year by year.
Posted by Padre Steve at 8:57 AM