A New Cathedral for the South! 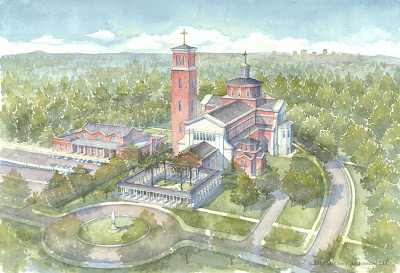 The announcement is a “monumental and historic moment in the life of the Catholic Diocese of Raleigh and the state of North Carolina,” the bishop said.

The proposed cathedral campus is on a 39-acre tract of land adjacent to Western Boulevard and Centennial Parkway. The property is a remnant of 400 acres purchased in 1897 by Fr. Thomas F. Price, the “Tar Heel Apostle” who was the first native North Carolinian to be ordained a Catholic priest. He established an orphanage on the site called the Nazareth Community.

Bishop Burbidge said that the planned cathedral’s name commemorates the name of the chapel Fr. Price established at the site.

“It is fitting that the name of our new cathedral is the Holy Name of Jesus,” he remarked.

The diocese has contracted with the Washington, D.C. architect James McCrery to develop the cathedral design and to propose the most effective use for planned additions and other potential developments at the site.

The conceptual design for the cathedral is classical in style. Artistic renderings for the cathedral campus also show a two-story gathering hall and a parking facility that is both above and below ground. Bishop Burbidge said that in additional to being the “mother church of the diocese,” he hopes the campus will become a cultural venue, hosting sacred music concerts and lecture series.

The estimated cost of the cathedral campus is $75 to $90 million. The diocese said the project has received $10 million in pledges from a small group of donors in a short period of time.

The Diocese of Raleigh, which covers 54 eastern counties of North Carolina, said the continuing growth of the Catholic population prompted the need for a new cathedral. Between 2000 and 2010, the Catholic population increased about 42 percent from about 152,493 to 217,125 registered Catholics. The diocese estimates at least another 200,000 Catholics, mostly of Hispanic origin, are not registered with a parish.

The diocese’s current Sacred Heart Cathedral, located two blocks from the State Capitol, only has a seating capacity for 320 people, making it one of the smallest in the country.

After the new cathedral is dedicated, Sacred Heart Church will be “retained and honored” as the first cathedral of the diocese. It will continue to serve as “a vibrant part of the sacramental life of the diocese,” the diocese said.

Bishop Burbidge anticipates that the groundbreaking for the new Cathedral Campus will take place in mid-2013.

The Diocese of Raleigh has created a website for the new cathedral at http://www.holynamecathedralnc.org.
Posted by Padre Steve at 9:26 AM