Pope Benedict: God is present during 'times of darkness' 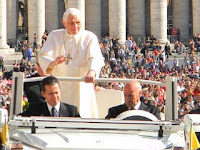 Pope Benedict XVI told pilgrims in St. Peter's Square that they should look to the Bible's third psalm to recall that God is near “even in times of difficulty, problems, and darkness.”

“In the Psalmist's lament,” Pope Benedict observed in his September 7 general audience, “each of us may recognize those feelings of pain and bitterness, accompanied by faith in God, which, according the biblical narrative, David experienced as he fled from his city.”

Pope Benedict presided over the Wednesday general audience at the Vatican before returning to Castel Gandolfo, his summer vacation residence.

His discussion of Psalm 3 served as the beginning of his treatment of the Psalms – which he called “the book of prayer par excellence” – as part of his continuing series of lessons on “the school of prayer.”

Psalm 3, Pope Benedict recalled, comes from “one of the most dramatic episodes” in the life of King David, to whom the Church has traditionally ascribed the entire book of Psalms. It represents David's cry for help after his son Absalom usurped his throne, forcing David to flee from Jerusalem in fear.

The incident prompts David to exlaim: “How many are my foes, Lord! How many rise against me! How many say of me, 'God will not save that one.'”

David's persecutors, Pope Benedict noted, not only threaten his life, but “also seek to break his bond with God and to undermine the faith of their victim by insinuating that the Lord cannot intervene.”

Their aggression against “the central core of the Psalmist's being” subjects David to one of the most serious temptations a believer can suffer, “the temptation of losing faith and trust in the closeness of God.”

But the author of Psalm 3 also recalls that God is “a shield around me,” and declares: “Whenever I cried out to the Lord, I was answered from the holy mountain … I do not fear, then, thousands of people arrayed against me on every side.”

“By praying this Psalm,” Pope Benedict told the crowd of pilgrims, “we share the sentiments of the Psalmist: a just but persecuted figure which would later be fulfilled in Jesus. In pain, danger and the bitterness of misunderstanding and offense, the words of this Psalm open our hearts to the comforting certainty of faith.”

“God is always close, even in times of difficulty, problems and darkness,” the Pope taught. “He listens, responds and saves.” David's cry of desperation, then, is also “an act of faith in God's closeness and His willingness to listen.”

Pope Benedict explained that the third psalm, like the entirety of the Old Testament, points to Jesus' experience of suffering, death, and final deliverance.

Through the words of this psalm, Christians can learn to “recognize (God's) presence and accept his ways, like David during his humiliating flight from his son Absalom … and, finally and fully, like the Lord Jesus on Golgotha.”

When darkness and pain arrive, the ability to recognize God's presence makes an immense difference, as it did when Christ died in circumstances that seemed to have no redeeming value.

“In the eyes of the unrighteous it appeared that God did not intervene and that his son died,” the Pope said. “But for believers it was at that precise moment that true glory was manifested and definitive salvation achieved.”

“May the Lord give us faith,” Pope Benedict concluded. “May he come in aid of our weakness and help us to pray in moments of anguish, in the painful nights of doubt and the long days of pain, abandoning ourselves trustingly to him – our shield and our glory.”
Posted by Padre Steve at 9:33 AM