Pope Benedict to Germans: Remain faithful to the Church 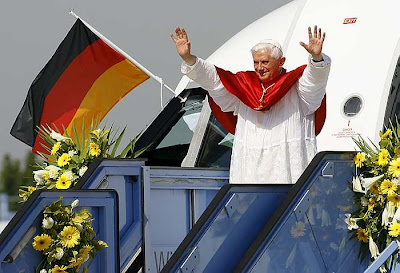 Pope Benedict XVI has encouraged German Catholics to remain faithful to the unity of the Church. He warned that those Catholics who view the Church as a mere institution are often further from God than agnostics.

“The Church in Germany will continue to be a blessing for the entire Catholic world: if she remains faithfully united with the Successors of St. Peter and the Apostles,” the Pope said at an open-air Sept. 25 Mass in the German city of Freiburg.

Pope Benedict updated the warning of Christ that “tax collectors and harlots” were closer to God than the Pharisees, offering a version “translated into the language of our time.”

“Agnostics, who are constantly exercised by the question of God, those who long for a pure heart but suffer on account of our sin, are closer to the Kingdom of God than believers whose life of faith is ‘routine’ and who regard the Church merely as an institution, without letting their hearts be touched by faith,” said the Pope.

Sunday was Pope Benedict’s last day of his state visit to Germany. Unlike Berlin and Erfurt, his previous destinations over the past four days, Freiburg is overwhelming Catholic. This was evident in the huge numbers at this morning’s Mass, held beneath blue skies and sunshine. Concelebrating with the Pope were the bishops of Germany’s 27 dioceses.

Predicted anti-papal protests have largely failed to materialize during the four-day visit, but the Pope still seemed acutely aware of those Catholic voices in Germany who dissent from Church teaching.

“The Church in Germany will overcome the great challenges of the present and future, and it will remain a leaven in society, if the priests, consecrated men and women, and the lay faithful, in fidelity to their respective vocations, work together in unity,” he said. He added that “the baptized and confirmed, in union with their bishop,” should “lift high the torch of untarnished faith and allow it to enlighten their abundant knowledge and skills.”

This renewal of the Church in Germany will “only come about through openness to conversion and through renewed faith,” said Pope Benedict. Jesus Christ “is always close to us, especially in times of danger and radical change, his heart aches for us and he reaches out to us,” he added.

“We need to open ourselves to him so that the power of his mercy can touch our hearts. We have to be ready to abandon evil, to raise ourselves from indifference and make room for his word,” he said.

In practical terms, the Pope suggested that each person ask themselves some basic questions about their personal relationship with God in prayer, in participation at Mass, in exploring his or her faith through mediation on Sacred Scripture and through study of the Catechism of the Catholic Church.

The papal liturgy itself was suffused with Germanic grandeur. Both the Mass settings and hymns were accompanied by a full orchestra. Meanwhile, the consecration of the Eucharist was welcomed in unison by the bell towers of local churches.

In his Angelus address immediately after the Mass, Pope Benedict held up Mary, the mother of Jesus, as a model for the Christian conversion who had said “yes” to God’s plan in her life.

"As we pray the Angelus, we may join Mary in her ‘yes,’ we may adhere trustingly to the beauty of God’s plan and to the providence that he has assigned to us in his grace,” said the Pope.

“Then God’s love will also, as it were, take flesh in our lives, becoming ever more tangible. In all our cares we need have no fear. God is good.”
Posted by Padre Steve at 7:51 PM