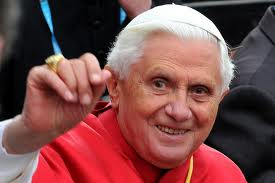 
Families who are living for Christ are among the protagonists in the Church's mission to bring about a new evangelization, says Benedict XVI.
The Pope affirmed this today before praying the midday Angelus with crowds gathered at the papal summer residence in Castel Gandolfo.
Reflecting on the passage from Philippians in today's liturgy, the Holy Father noted how the letter was written around the year 50 A.D., and therein was already a complete synthesis of the mystery of Christ: "incarnation, 'kenosis,' that is, humiliation unto death on the cross, and glorification."
"This mystery itself became one with the life of the Apostle Paul, who wrote this letter while he was in prison, awaiting a sentence of life or death," the Holy Father explained. "He writes: 'For me to live is Christ and die is gain.' It is a new sense of life, of human existence, that consists in living communion with the living Jesus Christ."
This communion, the Pontiff said, is not with a mere historical figure, "but with a man in whom God dwells personally."
"His death and resurrection are the Good News that, starting from Jerusalem, is destined to reach all people and nations, and to transform all cultures from within, opening them to the fundamental truth: God is love; he became man in Jesus and with his sacrifice he ransomed humanity from slavery to evil, giving it a trustworthy hope."
Benedict XVI proposed that today "we live in an epoch of new evangelization."
"The protagonists of this mission," he said, "are the men and women who, like St. Paul, can say: 'For me to live is Christ' -- persons, families, communities, who decide to work in the vineyard of the Lord, according to the image of this Sunday's Gospel. Humble and generous workers, who do not ask any other recompense than participating in the mission of Jesus and the Church."
Posted by Padre Steve at 11:43 AM