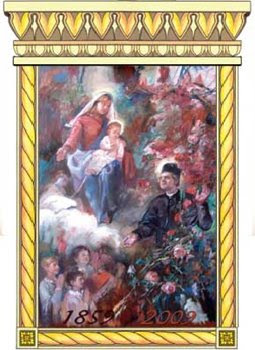 Coinciding with the Solemnity of “Corpus Christi” and the traditional celebration of the “carpet of flowers”, the civil and religious authorities of Genzano of Rome, a township in the Alban hills not far from the Italian capital will pay homage to the Salesian Congregation on the occasion of the 150th anniversary of its foundation.

This afternoon the casket containing a special relic of the Saint of Youth will arrive at the “Saint Luigi Versiglia” Salesian Institute where one of the two Italian novitiates is located and where it will stay until Tuesday 16 June. The programme for its stay is full of liturgical, sporting and cultural events aimed at involving the members of the Salesian Family and the people of Genzano, especially the youngsters and young people.

On Sunday 14 June, the Rector Major Fr Pascual Chávez will concelebrate at the Solemn Mass at which Bishop Marcello Semeraro of Albano will preside. The Mass will be broadcast live on RAI 1, the main channel of Italian State TV, and it will also be possible to follow it in streaming on the RAI site at 10.50 (GMT+1).

Afterwards in the Town Hall there will be a meeting of the Rector Major with the members of the Genzano Council and delegations from other connected cities.

The organisers of the traditional ”carpet of flowers”, which since the XVIII century has been a feature of the Solemnity of “Corpus Christi” in Genzano, have chosen this year as the theme for the occasion: Don Bosco and the Salesian Congregation on the 150th anniversary of its foundation.

The main design of the carpet of flowers on which the “Corpus Christi” procession will finish was produced by Natalia Tsarkova, well-know as the official Pontifical artist. The Orthodox artist taking her inspiration from the Pergola of Roses shows the founder of the Salesian Congregation as he emerges from the Pergola which was pointed out to him by the Blessed Virgin. Pierced by the thorns, Don Bosco is immersed in the colour of the red roses, a colour which in theological imagery signifies the charity, spirituality, purification and martyrdom which nourishes his work of education.

“This marvellous image will be at the centre of the carpet of flowers.” – says Fr Angelo Santorsola, Rector of the Salesian Institute in Genzano. “This mark of respect which the authorities have decided to pay to Don Bosco demonstrates very clearly Don Bosco’s great passions: the Eucharist, the Madonna and the Church.”

Presiding at the “Corpus Christi” procession will be Cardinal De Giorgi.
Posted by Padre Steve at 5:27 AM