I found this interesting article at the CNA site: 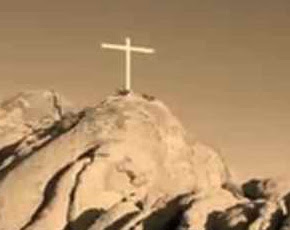 The U.S. government has defended the constitutionality of the 75-year-old Mojave Desert Cross which memorializes World War I veterans.

Submitting a brief in the Supreme Court case Salazar v. Buono, the government argued that the case should be dismissed because the plaintiff has not been personally injured or denied any rights by the presence of the cross but only claims to be offended by it, the Becket Fund for Religious Liberty says. Glen M. Gardner, national commander of the Veterans of Foreign Wars of the U.S. and its Auxiliaries (VFW), said in a column at the VFW web site that the seven-foot-tall white cross mounted on Sunrise Rock is currently covered with a plywood box according to a lower court order.

A district court initially ruled that the cross had to be removed. Congress then enacted legislation ordering the Department of the Interior to transfer an acre of land, including the cross, to the VFW in exchange for a parcel of equal value elsewhere in the federal preserve where it is located.

The U.S. Court of Appeals for the Ninth Circuit permanently enjoined the government from enacting the property transfer.

“If the High Court rules in favor of the plaintiff, every such memorial across the land will be in jeopardy of being torn down - and the ultimate loser will be America,” Gardner wrote. “That's because veterans’ memorials help our nation remember what came before.”

“The critics argue that organized religion and its symbols have no place in government even though our country was founded on religious freedom and tolerance,” he added.

"Stripping this country of every symbol-even the religious ones-that might offend somebody somewhere will impoverish American culture," Eric Rassbach, National Litigation Director of the Becket Fund, said in a statement. "The First Amendment guarantees the right to speak and believe freely; it does not guarantee the right to silence those who disagree with you."

"If the Supreme Court strikes down this memorial, tens of thousands of memorials around the country stand at risk," he warned.
Posted by Padre Steve at 4:34 PM